The Business Development Conference 2015 of Al-Arafah Islami Bank Ltd (AIBL) was held on Friday (January 16, 2015) at The Westin Hotel, Dhaka. Chairman of the Bank Badiur Rahman inaugurated the conference as the Chief Guest. The meeting was presided by the Managing Director of the Bank Md. Habibur Rahman. 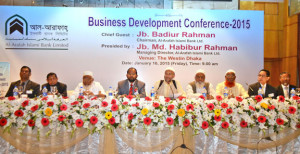