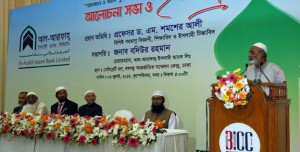 Directors of the Bank, Members of the Shariah Supervisory Committee and Top Executives of the Bank along with Industrialists, Businessmen, High ranking Officials of Government and non-Government organizations, Journalists and Intellectuals, Islamic Thinkers, Professionals and dignitaries of different levels of the society were present in the function.