India and Bangladesh have approved setting up of four more border haats along the Indo-Bangla border in Meghalaya with an aim of increasing bilateral trade and improve living conditions of border residents. 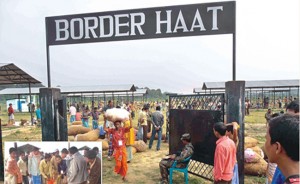 “The Government of India and Government of Bangladesh have approved setting up of four more haats along the border, apart from the two which have been in operation for the past three years,” Meghalaya Chief Secretary P Barkos Oflyn Warjri said.

He said the approval was granted at Dhaka during the last meeting of the top officials of the Ministry of Commerce and Ministry of External Affairs of both the countries.

Of the approved haats, two will be in East Khasi Hills – Bholaganj and Ryngku – and one each in South West Khasi Hills (Nolikata near Ranikor) and South Garo Hills (Sibari), Warjri said.

Meghalaya government had earlier proposed setting up of 22 such haats along the border after identifying traditional local markets that existed prior to 1971 Liberation War.

“We have sent our proposals to the Commerce Ministry and it is up to the Government of Bangladesh to decide on the matter,” Commerce and Industries director W Langstang said.

According to the official, the department is in the process of constructing four haats approved by both countries and is now awaiting funds from the Centre for execution of works at the ground level.