There are signs of the persistent dense fog and poor air quality finally improving across India and Bangladesh next week, when a tropical threat looms.

The end to the stagnant air pattern from Pakistan to northern India to Bangladesh will not come through this weekend. 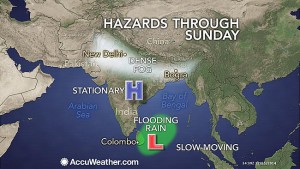 With weather disturbances passing by to the north too weak to stir up and clear the air, an area of high pressure will instead hold firm and lead to continued dense fog, chilly air and poor air quality.

Visibility will continue to drop to zero frequently in many communities, creating dangers for motorists and possible flight delays. This includes in Multan, Pakistan, and New Delhi and Patna, India.

The Hindustan Times reports that the crash killed two people, and the accident led to another crash on the opposing lane as motorists stopped to view the first incident.

Earlier in the week, three other people perished in dense fog-related accidents in northern India as the accompanying cold claimed at least 31 lives in Uttar Pradesh.

The blanket of dense fog, clouds and smog have kept daytime highs below normal, a theme that will persist through the weekend. Highs in New Delhi will remain about 6 degrees C (10 degrees F) below typical late December highs.

Around Tuesday and Wednesday of next week, the jet stream is expected to dip far enough to the south to clear the air across Pakistan and northern India finally.

The jet stream will also work to pull a tropical low northward through the Bay of Bengal, potentially causing the dense fog in northeastern India and Bangladesh to be replaced with flooding rain during the middle to latter part of next week.

Depending on the exact track of the low, the torrential rainfall could also target Myanmar.

The low could strengthen into a tropical depression or minimal tropical cyclone before moving inland, according to AccuWeather.com Senior Meteorologist Jason Nicholls. That would result in a zone of damaging winds also accompanying the low onshore.

Prior to reaching the northern Bay of Bengal, the low will first continue to spread torrential rain into Sri Lanka through this weekend.

Widespread rain amounts of 100 to 200 mm (4 to 8 inches) are expected across the eastern half of the island. Locally higher totals will occur, especially along the eastern slopes of the mountains. Flash flooding and landslides are sure to result.

As the low is drawn northward, downpours may graze the southeastern coast of India early next week.