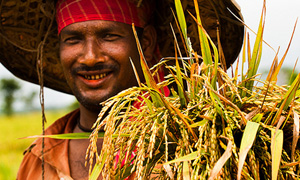 BBS says that rice production from the FY 2013-14 Aman crop, which contributes about 38% of the total rice production in the country, stands at around 13 million tons, up about 1% from about 12.9 million tons in FY 2012-13. BBS says that the planting area under the Aman crop declined by about 1% to around 5.5 million hectares from 5.6 million hectares in the previous year, but the average yield has increased by about 3% from 2.29 tons per hectare to 2.36 tons per hectare.

Meanwhile, Bangladesh’s rice imports in FY 2013-14 have reached 374,560 tons as of March 18, 2014, of which 371,500 tons are imported by the private sector and 3,060 tons are imported by the government. Imports are higher this year despite higher yields partly because of low prices in the international markets. Currently, the export price of Indian parboiled rice is around $410 per ton in the international market, while the wholesale price of the same quality rice is quoted at $430 per ton in Bangladesh.