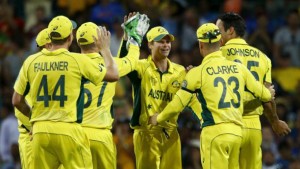 Australia will now meet New Zealand, the only team they have not beaten in the tournament and the Kiwis will play the summit clash at the Melbourne Cricket Ground on Sunday, which will be their first match outside New Zealand in this tournament.

Captain MS Dhoni kept the Indian hopes alive with a run-a-ball 65, a knock that was studded with 2 sixes and 3 fours before he was run out by direct hit from Glenn Maxwell.

India got off to a good start in their run chase with openers Rohit Sharma and Shikhar Dhawan putting up a 76-run stand before Josh Hazlewood ws brought back into attack and he struck with the fifth delivery which Dhawan hit to Glenn Maxwell at deep extra cover to to fall for 45.

Mitchell Johnson then struck a huge blow with a short ball dismissing Virat Kohli (1) who went for a pull but got a top-edge that ballooned up and keeper Brad Haddin had all the time in the world to position himself under the ball.

Johnson then struck again in his next over as Rohit edged a delivery onto his stumps as India were reduced to 91/3.

Australian captain Michael Clarke brought James Faulkner back in the attack in the 23rd over and he had Suresh Raina (7) caught behind by Haddin to place India at 108/4.

Ajinkya Rahane hit two fours in his 44-run knock that came off 68 balls before Mitchell Starc had him caught behind by Haddin.

Ravindra Jadeja hit 2 fours in his 16-run knock before he was run out by Steve Smith.

Earlier, Steven Smith’s brilliant century propped up Australia before Indian bowlers staged a comeback of sorts but the hosts still managed to post a commanding 328/7.

This was the highest total by any team against India in this edition of the mega-event as the Australian batsmen dominated proceedings for the major part to become the first team to post a 300-plus score in a World Cup semifinal.

This was also the only time that Indian bowlers failed to take all 10 wickets of the opposition team and the rivals managed to score a 300 plus score after winning the toss.

Smith batted like a man possessed as the Indian attack looked pedestrian for the first time in front of the local boy whose 105 came off only 93 balls with 11 boundaries and two sixes.

Aaron Finch, who played the role of sheet anchor to perfection with a patient 81 off 111 balls that had seven fours and a six, added 182 off 31 overs for the second wicket with Smith.

It was the first time that Indian pace attack was put to sword as the trio of Umesh Yadav (4/72 in 9 overs), Mohammed Shami (0/68 in 10 overs) and Mohit Sharma (2/75) were hammered into submission due to some poor planning as well as execution.

However, it was Ravichandran Ashwin, who walked away with honours with decent figures of 1/42, which included the prized scalp of dangerous looking Glenn Maxwell (23, 14 balls) with a well thought out trap.

It was because of Ashwin that India could stop Australia from racing away to a total in the range of 350 which looked possible when Maxwell started tonking the seamers.

The Australian innings was all about Smith’s approach and the manner in which he tackled the Indian bowling which has been a dominant force throughout the tournament.

So simple yet effective was Smith’s approach at the crease that it never seemed he was scoring at a rate of more than run-a-ball yet he did it with elan. The 100 came off 89 balls.

The floodgates opened in the 10th over of the Australian innings bowled by Yadav when Smith smashed him for four boundaries. Umesh’s first spell of five overs went for 39 with six boundaries and a six taken off his bowling.

It started with a cover drive and ended with a hat-trick of pull-shots as Yadav repeatedly erred in length bowling too short.

With each and every shot, the common Australian sports anthem ‘Come on Aussie Come on’ sang by a motley bunch had more impact than the ‘Jeetega bhai Jeetega’ from the Indian fans.

The Australian innings started to gain momentum after that. While Finch worked out the singles and doubles with occasional boundary, Smith pulled anything that was slightly short in length. The chip over mid-wicket off Ravindra Jadeja was sheer class.

Not for once did he look troubled by Indian bowlers as he reached from 86 to 100 with a two boundaries with a six in between.

The normally disciplined Indian pace attack bowled too short as seven out of 11 boundaries hit by Smith came off pull shots.

It was a short ball that finally ended a wonderful knock when Smith couldn’t control the hook shot off Yadav’s bowling to be holed out at deep square leg.

Once Smith departed, Maxwell teed off but it was Ashwin’s clever bowling and good captaincy by Mahendra Singh Dhoni that brought about the hard-hitting Aussie’s downfall.

Ashwin flighted one and Maxwell wanted to muscle it over deep square leg boundary found the only fielder placed at that position.

Maxwell’s departure saw a mini collapse as Australia slumped from 233 for two to 248 for five before Shane Watson (28) and James Faulkner (21) added 36 runs at a quick clip in only 4.2 overs as Australia posted a more than a decent total in a crunch match.

The Indians conceded 87 runs in the last 10 overs.