Japan’s prime minister Shinzo Abe met with his Australian counterpart on Tuesday to sign agreements bolstering defense and trade ties between the countries.

The defense deal, which involves the transfer of military equipment and technology, comes a week after Japan’s government ushered in a new era for the country’s defense force by reinterpreting its pacifist constitution to allow greater use of its military to defend allies. 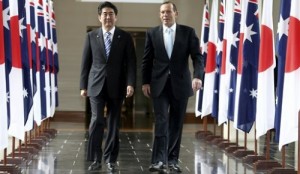 Abe wants Japan to have a larger role in global security amid China’s growing military might. The defense policy change drew criticism from Beijing, which is embroiled in a territorial dispute with Japan.

That leaves Australia in a delicate situation, given that China is its largest trade partner. Prime Minister Tony Abbott sought to downplay any suggestion that Australia’s defense deal with Japan — which centers around plans to jointly develop stealth submarine technology — is a slight against China.

“Australia welcomes Japan’s recent decision to be a more capable strategic partner in our region. I stress: Ours is not a partnership against anyone. It’s a partnership for peace, for prosperity and for the rule of law,” Abbott told parliament in the nation’s capital, Canberra. “Our objective is engagement. And we both welcome the greater trust and openness in our region that’s exemplified by China’s participation in this year’s RIMPAC naval exercises.”

RIMPAC, or Rim of the Pacific exercises, are the world’s largest maritime drills.

Abe used his speech to parliament in part to address the military policy shift.

Abe also made a point to note that Japan and Australia were intent on “joining hands with the United States, an ally for both our nations.”

During Abe’s three-day visit to Australia, he and Abbott will also sign a free-trade agreement that will gradually reduce Japan’s nearly 40 percent tariffs on Australian exports of beef, and axe Australia’s tariffs on Japanese-made vehicles, household appliances and electronics.