Bangladesh is ranked 32nd in the list of fragile states, according to the newly released Fragile States Index (FSI) by the Fund for Peace.

The annual FSI was published on Fund for Peace’s website highlighting global political, economic and social pressures experienced by the states. 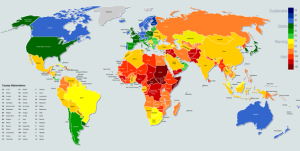 According to the report, among the 178 countries in the list, seven out of ten top fragile states are from Africa: South Sudan (1st), Somalia (2nd), Central African Republic (3rd), Sudan (4th), Democratic Republic of the Congo (5th), Chad (6th), and Gini (10th).

Among the Asian countries, Afghanistan ranked 8th, Yemen 7th, and Syria in 9th position in FSI 2015.

First ten fragile states in the index are from Africa. Other countries listed in the index from the continent are Nigeria (14), Cote d’Ivoire (15), Zimbabwe (16), and Ethiopia (20).

Countries from Oceania are ranked in lower part of the index, meaning they are in better conditions. Solomon Islands is ranked 50th, followed by Papua New Guinea (57), and Fiji (82). Two giants of the continent—Australia and New Zealand are in 170th and 172nd position in the list.

Finland retains its best position, with its Nordic neighbours Sweden and Norway rounding out the best three rankings. Denmark is ranked 175th position in the index, followed by Luxemburg (174), Switzerland (173), Iceland (171), and Ireland (169).

The Fragile States Index (formerly the Failed States Index) is an annual report published by the United States think-tank the Fund for Peace and the magazine Foreign Policy since 2005.