Bangladesh, the world’s third largest cotton importer according to the U.S. Department of Agriculture, is on a mission to topple No. 1 importer China.

“Obviously, we wish to take China’s place, and that day is not so far off — two, three years’ time,” Mehdi Ali, general secretary of the Bangladesh Cotton Association, told WSJ Frontiers on Friday at an industry conference in Miami.

China’s imports are expected to drop 50% during the upcoming season as it winds down a strategic stockpiling program, according to the National Cotton Council, a U.S. industry group — leaving room for Bangladesh to expand its role in the international market. 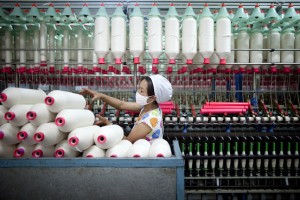 Abdul Hai, managing director of Raya Spinning Mills in Dhaka, Bangladesh, said that over the past three years, he has expanded his spinning capacity from 13,000 spindles to 33,000 spindles, and he has plans to keep growing.

Ali expects imports and mill capacity in Bangladesh to double over the next five years, which will help the country overtake China as the world’s top importer of the fiber.

The USDA forecasts that Bangladesh will import 3.9 million 480-pound bales of cotton during the season that ends on July 31. Ali estimates that during the 2014 calendar year, the country will import 5 million bales.