As smaller economies rejoice in the forming of the New Development Bank (NDB) led by Brazil, Russia, India, China and South Africa (BRICS), down in South Asia Bangladesh seems to be already ramping up to join the bank.

Following the 6th BRICS Summit announcement, the Bangladesh media have been abuzz with reports of the country’s keenness to join NDB. News has it that work exploring the possibilities of joining the Bank has already started. 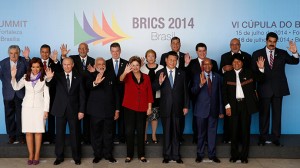 Bangladesh, which proclaimed independence in 1971 after breaking away from Pakistan, has been growing at a rate a little over 6 percent. What was once sneeringly called a “basket case” by Henry Kissinger is belying its skeptics with the progress it’s making in improving living conditions of its people. From 49 percent of the population living below the poverty line in 2000, the World Bank estimates that Bangladesh is inching nearer to its target of reducing extreme poverty to 22.5 percent by 2015.

The South Asian nation is aiming big now. It wants to achieve the middle income country (MIC) status by 2021. However there are tailbacks on the way which need urgent attention.

FDI inflows to Bangladesh totaled $1.6 billion in 2013, up 24 percent from $1.3 billion in 2012, according to a report by the United Nations Conference on Trade and Development (UNCTAD).

Though significant, the investment might not be sufficient to help Bangladesh graduate to MIC. Gaps in infrastructure – overstrained land, power, ports, and transportation – are a major “deterrent” impeding investors in general and “FDI in particular.”

The Asian Development Bank recommends an all-inclusive improvement in the quality of the country’s infrastructure in terms of better roads, ports, railways and electricity supply to “increase the economy’s external competitiveness,” suggesting a public-private partnership (PPP) approach for executing infrastructural investments.

It emphasizes the country’s private investment needs to be scaled up to the tune of 37.6 percent of GDP from the current 28.7 percent, to attain a target growth of 7.5 percent to 8 percent to reach its MIC goal.

Though the country has been receiving sizeable developmental aid from multilateral institutions such as the World Bank, the IMF and the ADB, totaling about $2.78 billion in FY2012-13, the conditions of such aid have been widely criticized as interfering and less empathetic toward local conditions. The intent now is to move towards alternate sources of funding.

From the initial phase of funding, basic necessities like food self-sufficiency, organizing domestic resources, and improving social indicators, by the Eighties the Bank shifted its attention towards policy reforms that would facilitate a thriving private sector.

However, the World Bank held government responsible for inadequate execution which yielded the mixed result of building private sector. Consequently, the Bank levied more rigorous policy conditions, which experts feel were beyond what the government could implement.

In his essay, ‘Aid Effectiveness in Bangladesh – is the glass half full or half empty?’ Professor MG Quibria writes that the World Bank reform recommendation was based on privatization, liberalization, and stabilization – with insufficient analysis. It imposed policy conditionalities with the “agreement” of the bureaucracy, excluding that “a core constraint in the development process in Bangladesh was the government itself and its unwillingness to enforce the needed public sector reforms.”

Even in case of ADB, states the essay, while a number of its programs were considerably successful (79 percent between 1999 and 2008), its impact was not evenly distributed towards the long term progress of the country.

An opinion piecetitled ‘Is IMF’s New Condition A Threat To Our Sovereignty?’ voices concern over the Bangladesh government’s borrowing of $1 billion from the IMF in 2012 under the Extended Credit Facility (ECF) which sets borrowing limit for the country’s non-concessional loans.

“China has proposed billions US dollars of credit for different infrastructure development projects in Bangladesh. But the government cannot take those loans due to the borrowing ceiling limit by the IMF,” the write-up says.

The IMF also offered to supervise the aids Bangladesh receives – both concessional and non-concessional under Debt Limit Policy (DLP), which is viewed as a tool to curb Bangladesh’s independence in acquiring external aids.

Finance Minister Abul Maal Abdul Muhith was quoted as saying that Bangladesh has decided to join the BRICS Development Bank as an alternative to the existing US-dominated World Bank and International Monetary Fund funding. Another official in the Ministry of Finance told Financial Express that they hoped the BRICS Bank will levy less strignent loan conditions.

A hand from China?

Thus the NDB is good news. Better news is perhaps the fact that China – the most committed member among the five – has been showing keen interest in Bangladesh, which the Asian major feels will be an important component of its “rebalancing” strategy.

A South China Morning Post report calls Sino-Bangladesh relations as a “bridge to India.” While the Bangladesh-China-India-Myanmar (BCIM) Economic Corridor will connect Bangladesh to Kunming, the capital of Yunnan province, and farther into the greater ASEAN region, for Beijing BCIM is the passage that links Chinese products to the huge and thriving consumer market of India.

The report even says the BCIM echoes China’s rising maritime power which is encountering its US counterpart along the sea lanes that connect China to energy resources in the Middle East and Africa.

The Asian giant has inked some significantly promising infrastructure deals which Bangladesh hopes will address many of its challenges.

The Chinese company Orion Holdings is said to be constructing a “garments village” in Munshiganj towards the south of Bangladesh’s capital city, Dhaka. The project is expected to end many pressing problems of the capital city, including an array of safer factories which so far are believed to be housed in risky conditions.

The China Harbour Engineering Company will also be involved in developingthe deep sea port towards the south of Bangladesh in Sonadia region, which many hope will surface as a key commercial center of South Asia, allowing maritime access to the Yunnan region of China, India’s noncoastal northeastern states, Nepal and Bhutan.

China is also eyeing a role in the construction of the massive Padma Bridge project, the most significant water body of Bangladesh. Currently crossed mostly by a ferry, which is often cumbersome and perilous, the river separates the southwest from the rest of the country, including Dhaka.

The project, once completed, is believed to bring in an additional 1.2 percentage points to the country’s GDP growth. For China, the bridge is a convenient link to the garment factories of Bangladesh, mostly lying towards the west of Padma River.

Significantly China is also said to be coming forward to partner in the building of a 1,320 megawatt coal plant at Patuakhali, aimed at addressing Bangladesh’s acute power problem.

Bangladesh is also fast emerging as a hub for its low-wage workforce to man China’s garment and leather works as the Asian giant leaps forward to more advanced manufacturing. Chinese businesses are investing in the country to set up garment and footwear factories.

Monitor Global Outlook states that global brand functioning in China have been acquiring raw materials from Bangladesh since 2012, which is already touching $171.77 million from last year’s $139 million. Garment exports alone from Bangladesh to China surged by over 68 percent between the fiscal years 2012-13 and 2013-14.

Overall trade between China and Bangladesh is said to have reached $6.7 billion in 2013 – over 10 percent of Bangladesh’s total volume of trade in the year – as per reports by the Export Promotion Bureau of Bangladesh.

So sound reasons for China to have formally invited Bangladesh to join its $100 billion Asia Infrastructure Investment Bank (AIIB), apart from reportedly, as per local media, showing interest that the country joins the BRICS Bank too.

Sobhan continues: “Enter the Chinese. No one develops infrastructure better than them.”

China’s backing though might not really lead Bangladesh to join the NDB immediately it certainly will help the South Asian country to get some preferential treatment. However NDB is in its initial state of formation with a huge requirement to build up its initial credibility.

The most important prerequisite for this would be to seek a strong and efficient domestic financial structure that could work in tandem with NDB. So Bangladesh will have to present a viable picture of domestic environment for investment with projects fittingly assessed in terms of their soundness and possibility of success.

-By Jhinuk Chowdhury, a former journalist based in India and is currently working as an independent writer. Jhinuk can be reached at jhinuk.cchowdhury@gmail.com. The statements, views and opinions expressed in this column are solely those of the author and do not necessarily represent those of RT.