The political crisis in Bangladesh has only intensified following the farce of the January 5 national election, which was boycotted by Bangladesh National Party (BNP)-led opposition alliance. 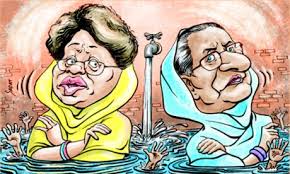 The BNP is demanding new elections under a caretaker government. Neither the BNP nor the AL has the slightest concern for the democratic rights of the workers and poor in the impoverished country. The deep divisions in the Bangladesh political establishment reflect longstanding rivalry over the levers of power that are used to maintain the systems of patronage associated with each of the main parties. Now this competition is intersecting with intensifying geo-political tensions throughout the region, especially between the US and China.

During the lead up to the election, the Obama administration sought to pressure the Awami League government over its growing economic and defence relations with China. It expressed concerns over the state repression unleashed against protests organised by the BNP alliance. After the election, the US “condemned” the campaign violence, questioned the election’s “credibility” and called for fresh polls by May or June.

Far from defending democratic rights in Bangladesh, the US government’s overriding preoccupation is to undercut Beijing’s hand in Dhaka, as part of its “pivot to Asia” to combat China’s influence and encircle it militarily. Addressing the US Congress Human Rights Commission last July, Robert Blake, a former assistant secretary of state for south and central Asian affairs, declared: “Bangladesh is of strategic importance to the United States.”

Bangladesh is located between India and China, adjacent to vital Indian Ocean sea-lanes. Beijing is planning to build a deep-sea port on SonadiaIsland off the coast of southeast Bangladesh. In 2010, a US Congressional Research Service report on Bangladesh noted that “port development in Bangladesh could be seen as part of a ‘String of Pearls’ strategy that could be used by China to secure sea lanes that cross the Indian Ocean.”

Bangladesh’s relations with China strengthened during the 2002-2006 BNP government of Prime Minister Khalida Zia—a process that continued under the Awami League after 2006. Cash-strapped Dhaka now relies on funds from Beijing, and China is Bangladesh’s biggest trading partner, with two-way trade surpassing $US8 billion in 2012.

Beijing is also involved in infrastructure projects, developing roads, railways and the country’s main harbour at Chittagong, and the Bangladesh-China-India-Myanmar (BCIM) economic corridor, which aims to connect Kolkata with China’s Kunming city via a highway running through Bangladesh and Myanmar. China has said the BCIM will “change the geo-political map in Asia and the world.”

Dhaka and Beijing also signed a defence pact in 2002 under Zia’s government. Since then China’s arms supplies have increased, including artillery guns, missile systems and howitzers. Bangladesh built a missile launch pad near Chittagong port with Chinese assistance and the two navies collaborated extensively in 2010. Last month, Dhaka finalised an agreement to buy two submarines from China.

The Obama administration has indicated that it intends to adopt a carrot and stick approach to Bangladesh. AFP reported that, notwithstanding Washington’s election concerns, “the United States largely plans to maintain cooperation with a Muslim-majority country.” The World Bank—in which the US holds the majority of shares—recently approved a $410 million credit line for Bangladesh.

Michael Kugelman, an analyst at the Woodrow Wilson International Centre for Scholars, has highlighted the needed for the US to pay more attention to Bangladesh. In the Foreign Policy journal, he warned: “Bangladesh has largely been ignored—a troubling omission.” He insisted: “Given its geopolitical significance and volatile neighbourhood, Washington needs to keep a close eye on Bangladesh this year.”

Elaborating on his advice, Kugelman told AFP: “The United States has an interest in maintaining stability in the region as it prepares to withdraw combat troops from Afghanistan and also tries to increase clout in Asia faced with the rise of China.”

As well as putting pressure on the Awami League, the US is seeking to refashion the opposition BNP. Before the election, Washington supported the government’s crackdown on Islamic fundamentalists, including Jamaat e Islami (JEI), which are part of the BNP’s coalition. Responding to the US criticism, Zia told the New York Times that the BNP was ready to break ties with it. “With Jamaat, it’s not a permanent alliance,” she said, positioning herself to benefit from any new poll.

The Indian government’s approach to Bangladesh’s political crisis has differed from Washington’s line, though they both want Dhaka to distance itself from Beijing. India has longstanding ties to the Awami League, which New Delhi installed in power following its military intervention into the 1971 uprising against Pakistan that led to the formation of Bangladesh.

India labelled the election a “democratic process,” while criticising the violence. New Delhi did not want Zia to come to power leading a party regarded as anti-Indian, pro-Pakistani and more oriented to China. Some analysts predicted that Zia would revive her 2001-2006 “Look East” policy, mainly aimed at developing ties with China. In 2012, she made a week-long visit to China and met Xi Jinping, then China’s leader-in-waiting.

India is also satisfied with the Awami League’s help in cracking down on various separatist movements in India’s northeast. In late 2009, Dhaka police arrested United Liberation Front of Assam chairman and founder Arabinda Rajkhowa, whose organisation wants to establish a separate statelet in Assam.

At least one Indian newspaper reported that New Delhi would take an initiative internationally to counter pressure on Dhaka to hold a fresh election. The Indian Express reported that India would possibly use its position as a member of the Commonwealth Ministerial Action Group to work against any move to designate the elections “undemocratic.”

According to the report, National Security Advisor Shivshankar Menon has already discussed the issue with his British counterpart, but is concerned by a “significant divergence of views” from Washington.

The intervention of the US, India and China into the political cauldron in Dhaka, far from resolving the crisis, will only further fuel the confrontation between rival factions of the Bangladeshi ruling class.