Bangladesh Embassy in WashingtonDC observed ‘Shaheed Dibash’ to commemorate the 62nd anniversary of the Language Martyrs Day and to celebrate the International Mother Language Day at the Bangabandhu Auditorium of the Embassy on Saturday in an eventful manner.

Participated by performers of 13 different countries including Bangladesh, the programme manifested a unique harmony of the nations for the protection of cultural diversity. 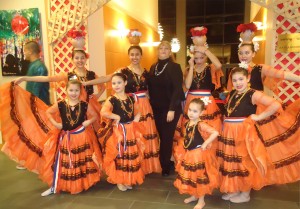 The Embassy held a discussion programme in the afternoon which was followed by a multicultural performance show. His Excellency Akramul Qader, State Minister and Ambassador of Bangladesh to the United States offered the opening remark and the keynote speech was presented by Prakhara Hartler from Sri Chinmoy Centre, Washington DC.

Ambassador Akramul Qader, in his speech, paid sincere tribute to the martyrs of 1952 language movement at whose sacrifice Bangla was established as the State language of Pakistan, to the father of the nation Bangabandhu Sheikh Mujibur Rahman, who not only participated in the language movement from jail, but also materialized the dream of a sovereign country for Bengali speaking people and to the Prime Minister Sheikh Hasina and those great expatriates whose efforts resulted into UNESCO’s declaration of 21st February as the International Mother Language Day. Ambassador Qader provided an account of all historical events that were prompted by the language movement and eventually led us to our freedom. The declaration of UNESCO has brought a new dimension to the day which signifies ‘unity in diversity’ and promotes cultural-linguistic diversity as well as multilingualism, he added. He also recognized Prime Minister’s initiative to have Bangla, language spoken by 250 million population of the world, recognized as an official language of the United Nations.

Prakhara Hartler, in her keynote speech, spoke about the spirit of oneness in the celebration of International Mother Language Day, which, in her words, is a powerful and inspirational manifestation of unity. Referring to various local languages and cultures which are under severe risk of extinction, she called upon all nations to work in harmony for preservation of cultural diversity. She also mentioned about Sri Chinmoy Centre’s events like ‘Songs of Souls’ which play remarkable role to establish harmonies unity.