A United Nations study released on Friday shows that Bangladesh has the highest rates – among 11 Asian countries surveyed – of people lacking access to electricity, clean water and sanitation.

The 2014 UN World Water Development report, titled Facing the Challenges, ranks Bangladesh below countries including Myanmar, Indonesia and Cambodia in access to the essential services. The study uses data collected in 2011.

“This report points out the existing problems,” Engin Koncagul, a UN World Water Assessment program officer, said on Friday. “Water and energy is very critical for sustainable development … from all [population] segments.” 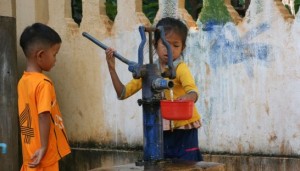 Cambodia’s population is smaller than all other Asian countries surveyed in these categories, except for Mongolia, the study says.

Cambodian People’s Party lawmaker Chheang Vun said the country has endured a tumultuous recent past, from which it is still recovering.

“Our country is not stable like [the other 10 surveyed], because we experienced a military coup and war, and had to start all over in 1979,” Vun said. “We began from zero then, which is why we are so far behind other countries.”

Most of those without electricity access live in rural areas, Vun said, adding that the government is working towards offering electrical access to all Cambodians by 2030.