A Bangladeshi boat club in UK is using its annual fundraising boat race to provide swimming lessons to youngsters in the Asian community.

Money raised will be used to encourage young people to learn to swim and participate more regularly in the city’s water sports activities. 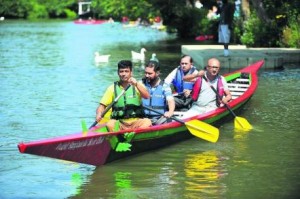 Club chairman Peter Travis, 73, said: “There’s a tendency for Asian kids not to learn to swim as much as English kids, which in Oxford is not a good idea.”

Although it is hoped funds raised will support Asian youngsters, young people from other backgrounds will also be supported.

Mr Travis said: “It means a lot to me because I think the river is used by many parts of the Oxfordshire community.”

The club raised around £10,000 to purchase two traditional Bangladeshi boats so it could hold the cultural tradition, known as Nowka Bais, in Oxford.

The Cowley resident added: “I think it’s very important to promote our culture to the wider community.”

Teams of eight are now needed to enter the family fundraiser but this year club members are also inviting non-Bangladeshi residents to join the race.

Entrants aged 16 and over are encouraged to take part. Boats must be manned by six paddlers, one person at the helm and one drummer.