The Ranganiketan Manipur Cultural Arts Troupe and Srila Sripada Education Foundation is organizing INDICLAD International Indian Classical Dance Festival 2013 in connection with 76th VYASA Pujah festival of His Divine Holiness B..SDamodara Swami Srila Sripada on December 8 in Imphal under the theme “For peace, harmony and unity in Manipur” in a spirit to rejuvenate an interest in the traditional Indian performing art forms among the youth in Manipur and India at large, said a release from Ajit Das, chairman, organizing committee INDICLAD.

The festival will be participated by world famous Odyssey dancer Sita from France, Tamanna Rahaman and her Manipuri Rasa dance group from Bangladesh who belong to the Islam community but are very good Manipuri classical dancers, travelling around the world with the message of peace and friendship in the language of classical dance. 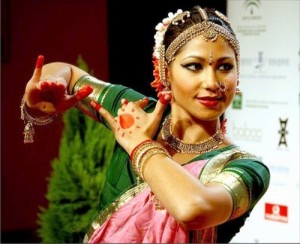 The beauty and uniqueness of the Manipuri Rasa dance will be enhanced by the dancers at this festival who are a group of foreign artists but have taken up the traditional art forms of the Manipuris with their heart and soul.

Dancer Tamanna, who has already landed in Manipur for the performance told in a meeting with media persons at Manipur Press Club today that this is her second visit to Manipur for her performance, the first visit which was in 2010.She is the founder of the NRITYAM dance academy in Bangladesh, which works on giving Rasa dance lessons to youths of the country.

In her speech, she disclosed that she had learnt of the Manipuri Rasa dance form from her Manipuri dance teacher Shantibala whom she had met in the year 1982 .

She also said that the Bangladesh government has given her full support to her dance form in every way and also gave the privilege to participate in various international dance festivals such as INDICLAD to showcase her talent.

“This is the second time I’m visiting Manipur for my performance.

It’s a great honour to showcase my dance to the people of Manipur, where the dance originates.

My dreams have come true and this would be the happiest moment of my life”, the artist commented.

The festival aims to invite interest for traditional art forms from the Indian youths which is on a decline for years now which is especially true in the context of Manipur.

The dedication and talent shown by the foreign artists through this event will ignite a different feeling and explore our cultural art forms which will be a proud moment for everyone .