A student from the Bangladesh School Muscat has set a new record in the A level examinations.

Eighteen-year-old Usamah Zaman bagged 4 A* grades which is a phenomenal performance. He scored A* in Mathematics, Further Mathematics, Physics and Chemistry. 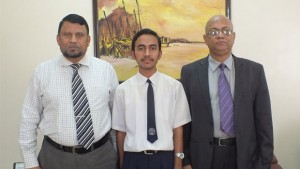 A delighted Director of Education Affairs of the Institution, Major Nasiruddin Ahmed (Retd), said, “He secured 100 per cent in 1 unit of Chemistry, 2 units of Physics, 1 Unit of Mathematics and 4 units of Further Pure Mathematics at his A2 level. His score in other units were also close to 100 per cent which brought his percentage to 98 per cent in the A Level examination held in June 2014.”

Usamah’s outstanding performance is a new benchmark in the Institution and it will encourage others to excel further and emulate him, said Ahmed. Usamah also performed brilliantly in AS Level examinations held in June 2013.

In the AS level he scored 100 per cent marks in 2 units of Chemistry, 3 Units of Physics and Mathematics respectively. His average marks in the June 2013 examinations were 98.73 per cent.

Speaking to Times of Oman on his achievement, Usamah said that he wants to be chemical or aeronautical engineer when he grows up.

“I express my deep gratitude to all my teachers who guided me over the years, right from my form classes till the A levels,” Usamah said.

“I humbly acknowledge the support given by my parents and the management of the school, without which this result wouldn’t have been possible,” he added.

His father, A. B. M. Nuruzzaman added, “Our son’s remarkable achievement will be an encouragement for other students and we are proud to see him as a trail blazer who set the standard for others to aim at.”

An overwhelmed Bangladesh School Principal Lt Col Mahmud Ul Alam (Retd) PhD, lauded the hard work of all students in general and Usamah in particular saying, “I heartily congratulate my students and appreciate their hard work. It is the result of collaborative effort.”