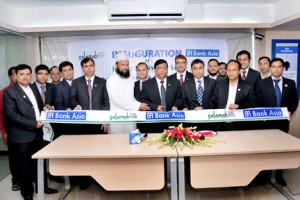 Earlier on Saturday Mr. Mohammed Roshangir, Deputy Managing Director and Zonal Head, inaugurated the Islamic window which has been shifted from Lohagara Upazila.

Prior to inauguration of the window, a training program on Islamic Banking was organized at the branch premises with 50 officials who are working on general banking and Salamah Desk.