Bangladesh-Malaysia Chamber of Commerce and Industry (BMCCI) has accorded BMCCI Excellence Awards 2013 to three distinguished business leaders for significant contribution in their respective fields. H.E. Norlin binti Othamn, High Commissioner of Malaysia in Dhaka, gave away the awards at a function held at the Grand Ball Room of the Westin Dhaka in the evening of Monday, 9th June 2014. The objective of the program was to give awards to the most prolific business leaders from different business sectors of Bangladesh for their contribution towards economic development. 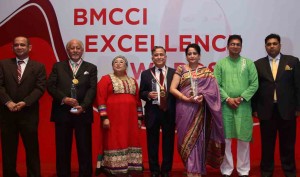 Besides the High Commissioner Norlin binti Othamn as the Chief Guest, it was also attended by Managing Director & CEO of Robi Axiata Limited Mr. Supun Weerasinghe as the Special Guest. Robi Axiata Limited was the Lead Sponsor of the event. All these guests addressed the audience and congratulated the winners. They spoke of their achievements and encouraged the entrepreneurs of Bangladesh to follow the acts of these successful people.

A trophy was presented to each of the winners by the Chief Guest while the Special Guest presented them with medals. It was the first business award program of BMCCI arranged to recognize the accomplishments of the great corporate personalities of our country. Their vision, administration and implementation have resulted into setting a new benchmark in their relevant sectors. All the winners of the awards were present on the occasion except for Mr. Abdul Matlub Ahmad. Mrs. Selina Ahmad, wife of Mr. Abdul Matlub Ahmad and a successful business personality herself, received the Award in his stead.

Mr. Nasir A. Choudhury, also the current President of BMCCI, welcomed the guests on behalf of BMCCI. Mr. Syed Nurul Islam, Chairman of the Organizing Committee of BMCCI Excellence Awards 2013, also spoke about the Awards and Awardees. Mr. Raquib Md. Fakhrul, Hony. General Secretary of BMCCI, concluded with his Vote of Thanks. The award distribution was followed by a musical performance by Badshah Bulbul and Dinat Jahan Munni.

Also in attendance were members and former presidents of BMCCI, top management of various financial institutions, and dignitaries from government and non-government sectors of Bangladesh.