Barcelona set up another Copa del Rey final against rival Real Madrid on Wednesday after drawing 1-1 at Real Sociedad to win their two-legged semifinal. 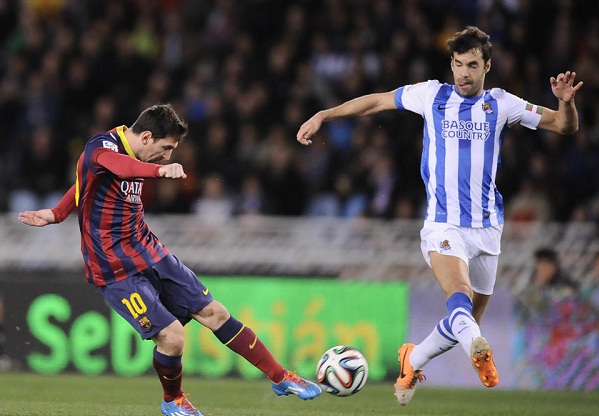 Goalkeeper Enaut Zubikarai did his part to keep Sociedad alive at the Anoeta with several key saves but the Basque club’s attack just couldn’t respond despite Carlos Vela hitting the crossbar in the 55th.

Barcelona, the record 26-time cup champion, faces Madrid three years after losing to its bitter foe 1-0 in extra time in a classic final.

Barcelona and Madrid go into the April 19th match having split their six     previous meetings in the cup final.

“It’s a ‘clasico,’ and there’s nothing more to say,” Barcelona coach Gerardo Martino said. “We were obliged to reach the final after Real Madrid ensured its place.”

He capped his individual run at goal in the 27th minute by unleashing a shot between three defenders that Zubikarai got a touch to but couldn’t keep from creeping over the line.

Zubikarai was sensational after that as he denied Pedro Rodriguez, with Pinto called on to deny Vela at the other end as Dani Alves arrived to clear the loose ball at the post.

Andres Iniesta’s outstanding second half began with a near-miss just    before Vela found the crossbar.

Zubikarai made back-to-back stops on Messi and Cesc Fabregas while Griezmann was unlucky on the hour mark after failing to get a shot away on a break.

Barcelona had done well to subdue Real’s attacks but could only watch as the hosts executed a perfect counter for French forward Griezmann to equalize with three minutes to play.

Martino said Xavi Hernandez’s second-half substitution was because of a knock that he hoped would not become an injury.

“The fact that these players reach so many finals and still value reaching another final is a great thing,” said Martino, who has already led Barcelona to the Spanish Supercup during his first season in charge.