Denied their traditional route out of poverty in the Gulf and often urged on by relatives, growing numbers of young Bangladeshis are joining the waves of Rohingya trying to reach Southeast Asia on horror boat journeys. 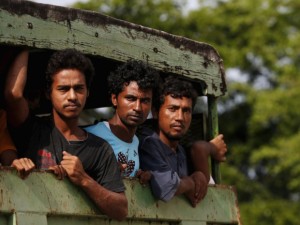 As the plight of millions has worsened in Bangladesh in recent years, smugglers organising the perilous sea voyages have grown increasingly sophisticated, keen to cash in on their misery.

Scores of men have left their grindingly poor villages throughout the country after the smugglers came calling, promising jobs in more prosperous and Muslim-majority Malaysia, according to officials and elders.

“We no longer have enough young men to farm our land or join the prayers in the mosque,” said cleric Wazi Ullah, 50, in Leda village, nearly 400 kilometers southeast of the capital Dhaka.

“People have borrowed at hefty interest rates or sold their gold ornaments or whatever precious farmland they have to pay for the deadly journeys,” he said.

Farm labourer Harunur Rashid said he too was looking at leaving, adamant that although migrants were perishing at sea, others were finding jobs in Malaysia thanks to the smugglers.

“There are hardly any jobs around here. My income is not enough for the six members of my family,” Rashid said from Leda, in the southern district of Cox’s Bazar.

More than 25,000 people, many persecuted Rohingya from neighboring Myanmar but also economic migrants from Bangladesh, made the dangerous sea journey south from the Bay of Bengal between January and March this year, the UN says.

Experts point to a lack of jobs as reasons for the exodus, particularly in rural areas, where plummeting prices for rice and other crops have only compounded the sense of desperation.

Although Bangladesh’s economy has been growing at over six percent annually, one-quarter of its people still live below the poverty line and the country is regularly struck by tropical cyclones and flooding.

“People from the poor rural areas where natural disasters have struck or the crop farming is no longer profitable are desperately trying to seek better opportunities abroad,” said Tasneem Siddiqui, who heads a Bangladeshi think tank on migration issues.

Bangladesh’s men have traditionally flocked to the Gulf and other regions, working in construction and other menial labor to send cash to their families back home.

The country of 160 million people has long suffered from endemic corruption and political turmoil, and relies on these multi-billion-dollar remittances to prop up its economy.

But the top three employers of Bangladeshi migrants — Saudi Arabia, the United Arab Emirates and Malaysia — drastically cut intakes in recent years after their job markets dried up.

Government figures show 875,055 Bangladeshis worked overseas in 2008, most of them in the Gulf. But that figure halved in recent years, with only 425,684 migrants in total in 2014, and female maids are now in higher demand than laborers.

Malaysia had been a favored destination for Bangladeshis, many of whom worked on plantations, with wages higher than in the Gulf.

But Malaysia halted the influx of workers in 2007 amid concerns about crime and illegal immigration via unscrupulous recruitment agents. The hiring resumed in 2013, but only 5,134 were granted entry last year.

A UN official, who has worked with boatpeople in the region for years, said Bangladeshis first started to leave in boats for Southeast Asia in small numbers around 2005.

“Since then the traffickers’ network has become stronger and spread into the entire country. It has become one of the most profitable forms of organised crimes,” the official said, declining to be named.

Many fishermen in Cox’s Bazar — where the smuggling rings are based — have joined the business. There is more money to be made that way than from catching fish.

“This is a multi-million-dollar industry with the involvement of gangs from Bangladesh, Thailand, Myanmar and Malaysia,” Tofail Ahmed, a senior anti-trafficking police officer, said.

At Dariardighi, a village of 3,000 farm laborers 30 kilometers north of Leda, about 200 young men have left on rickety boats in the past four years, according to a local council chief.

For Abdur Rahim, 21, who was persuaded by his cousin to leave in 2013, the journey ended in disaster.

“After 28 days, Rahim called me from the trawler,” his father Habib Ullah said.

“He begged me to send 200,000 taka, saying the traffickers beat him every day on the ship.”

But Ullah did not know where to send the money. Then last month another call came from two fellow passengers, saying Rahim was in a facility for the mentally ill in Thailand.

They had landed near a Thai jungle, and Rahim had been detained by police.

“The three were in the same boat,” Ullah said.

“While the two fled to Malaysia, my poor son has gone mad.”