Bangladesh has joined the ‘Global Declaration of Commitment to End Sexual Violence in Conflict’ as 123rd country reaffirming its commitment to denounce sexual violence during armed conflicts. 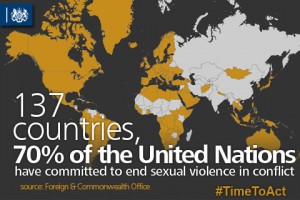 The Foreign Minister, in the letter, reaffirmed Bangladesh’s commitment to denounce sexual violence during armed conflicts in unequivocal terms and its relentless efforts to support global initiatives to end sexual violence in conflicts, reports UNB.

Bangladesh was the first South Asian country to have brought the issue of ‘sexual violence and women peace and security’ in the UN Security Council in 2000, as a non-permanent member of the Council and was instrumental in the adoption of UNSCR 1325.

The Global Declaration contains a set of practical and political commitments to end the use of rape and sexual violence as a weapon of war, which terrorises and destroys communities during conflict.

The UK government would host a ‘Global Summit to End Sexual Violence during Conflict’ on June 10-13, 2014 to bring the international community together to agree actions to end the use of rape as a weapon of war and the culture of impunity for those who commit these crimes. Bangladesh is expected to participate, at a high level, in this Global Summit.

Bangladesh’s decision to join this historic global declaration as the 123rd country was inspired by Prime Minister Sheikh Hasina’s tireless global advocacy to end all forms of violence against women and girls especially, sexual violence during armed conflicts, said the media release.

It was also a manifestation of national commitment to redress the most heinous forms of sexual violence including rape, enslavement and forced pregnancies and other forms of injustice inflicted upon more than two hundred thousand Bangalee women during Bangladesh’s Liberation War of 1971, it said.