Assistant United States Trade Representative (USTR) for South and Central Asia Michael J. Delaney on Sunday said Bangladesh matters greatly to the United States as it sets an important example in the region as a moderate and secular country.

Besides, he said, the US believes that Bangladesh is a key to developing trade and economic corridors between South and South East Asia. 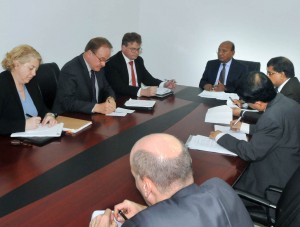 He was addressing a luncheon meeting to mark the first meeting on Trade and Investment Cooperation Agreement (TICFA) at Dhaka Chamber of Commerce & Industry (DCCI) conference room at Motijheel, reports UNB.

TICFA was signed in Washington on 25 November in 2013. The first meeting under the agreement is scheduled to begin on Monday in Dhaka.

Delaney also said that the TICFA is the primary mechanism for the USA and Bangladesh to discuss trade and investment issues and it provides a forum to address important issues such as the environment, Intellectual Property Protection, worker’s rights and  safety and economic empowerment of women.

He said for the betterment of Bangladesh’s garment industry, there has to be safe factories where workers are able to exercise their fundamental rights.

He said that factory owners or investors should be responsible to uphold the laws of Bangladesh. There needs to be some legal reforms to bring Bangladesh’s law into conformity with basic internationals standards, he added.

About suspending Bangladesh’s trade benefits under Generalized System of Preferences (GSP) programme. Delaney said the facilities were suspended following the extraordinary step taken by US President Obama in June 2013.

“The purpose in suspending trade benefits, however, was not to penalize Bangladesh, but rather to send a strong signal about the urgent need to address this concern,” Delaney said.

Ambassador Mozena said TICFA has been signed after 12 years of negotiations. He said through TICFA bilateral trade between Bangladesh and USA will be enhanced.

He said that presence of USTR representative at the first meeting on TICFA will benefit both countries.

BGMEA Preisident Atiqul Islam said that about 5 million people are working in the garment industry in Bangladesh and most of them are women.

He informed that Bangladesh is showing zero tolerance in terms of abiding by building code. He said that lessons have been learned from Rana plaza disaster. He demanded duty and quota free access of garments to the US market.