Bangladesh Border Guard (BGB) troopers have opposed the construction of a culvert, creating tension along the India-Bangladesh border in Tripura, an official said here Tuesday.

“When the workers were building a culvert adjoining a bridge in bordering Belonia town (in southern Tripura) Monday, the BGB jawans threatened to open fire unless the erection of the culvert was stopped,” said an official of the south Tripura district administration. 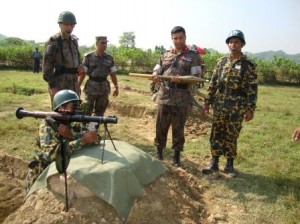 Senior officials of the district administration and Border Security Force (BSF) rushed to the spot and following their persuasion the road blockade was withdrawn.

However, the prevailing tension in the area has forced the BSF authorities to deploy additional troopers. The construction work has also been stopped.

“The district administration has asked the BSF officials to hold a flag meeting with the BGB officers to resolve the matter at the earliest,” the official said.

The official added that the BGB jawans have always protested any permanent construction on the Indian side, creating problems for the state authorities in repairing and constructing roads, embankments, water supply and irrigation projects.