The 26th annual general meeting (AGM) of the Bangladesh Insurance Association (BIA) was held in the Hotel Purbani International in the city on Friday.

Chaired by Sheikh Kabir Hossain, President of BIA, the meeting was largely attended by the chairmen, managing directors and senior executives of member companies. 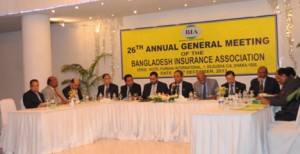 10-11 February, 2013 in Dhaka inaugurated by the Hon’ble Prime Minister as Chief Guest, (2) shifting of BIA’s office to its own new premises at Hossain Tower(9th floor), Box Culvert Road, 116, Naya Paltan, Dhaka-1000, (3) Purchase of a plot of land allotted by Rajuk at Uttara 3rd phase.

The meeting ended with a vote of thanks to the Chair wishing a happy new year 2014.