To increase air connectivity between the North East states and Bangladesh, the Bangladesh government has approved the proposal of its national air carrier, Bangladesh Biman to fly twice a week from Dhaka to Guwahati starting from July 1 this year.

“I am happy to say that Bangladesh Biman Airlines officers called on me last week and informed that they will start twice weekly flights from Dhaka to Guwahati from July 1,” said Bangladesh High Commissioner to India Tariq A Karim 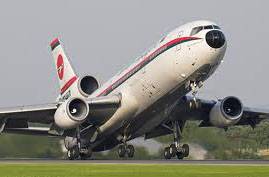 Karim who called on Meghalaya Chief Minister Mukul Sangma expressed his country’s keen interest in creating a connection with India’s North East and Meghalaya in particular in view of their close proximity, reports the Economic Times.

According to the official, the Bangladesh Biman Airlines would initially use their ATR aircrafts for the routes but are likely to use improved aircrafts like the Boeing 737 in the future depending on the economic feasibility of the route. At present, he said, the Airlines has sought for more aircrafts.

The High Commissioner also said that India’s Jet Airways, which had earlier scrapped off their scheduled flights between Dhaka and Guwahati in October 2012, have also shown interest in flying the same route again. “If Jet Airways also starts then we would have another two additional airlines which would result in the region having four flights a week,” Karim said.