The visiting Nisha Desai Biswal, US assistant secretary of state for South and Central Asian affairs, today stressed for strengthening the democratic processes to sustain socio-economic development in the region.

Biswal said this while meeting with BNP Chairperson Khaleda Zia at her Gulshan residence at 6:12pm. 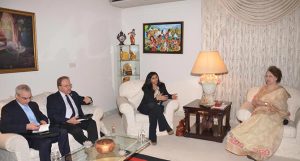 Asked present US stance on the January 5 parliamentary election, Mobin replied “No comments” and left the place.

Meanwhile, Opposition leader in parliament Raushan Ershad today told Biswal that the next general polls will be held in due time.

Raushan said this while replying to Biswal when she asked about the timeline of holding of the parliamentary polls at her residence in the capital this evening.

“During the meeting, she (Biswal) asked Raushan Ershad when the next parliamentary election will be taken place,” Tajul Islam the opposition chief whip told reporters after the meeting. “In reply, our leader said, it will be held in due time.”

Tajul Islam also told reports that Biswal wanted to know why the Jatiya Party (JP) participated in the January 5 polls during her 30 minutes talks that started around 5:10pm.

“She (Biswal) expressed positives attitudes on JP’s participation in the January 5 polls,” Tajul said in response to a query.

“BNP made fault to avoid the polls,” the JP lawmaker said adding no talks over mid-term election was taken place.

Biswal along with US Ambassador to Bangladesh Dan W Mozena entered Gulshan residence of Raushan, also a presidium member of the Jatiya Party, which won 33 seats in the boycotted January 5 election.

Meanwhile, she met BNP Chairperson Khaleda Zia at her Gulshan residence at 6:12pm.

She arrived Dhaka yesterday on a three-day visit.

She will have meetings with top government officials and leaders of opposition party, business community, labour and RMG sectors.

This is Biswal’s second trip to Bangladesh as she had been here soon after taking over as the assistant secretary of state for South and Central Asian affairs on October 21 last year.

Earlier, the US officia travelled to Bangladesh Institute of Peace Support Operation Training (BIPSOT) in Gazipur.

Before her arrival here, Biswal attended the 18th Saarc Summit in Kathmandu, Nepal.

Terming the January 5 parliamentary election a “deeply flawed” one, Biswal in February said this could have serious ramifications for stability in Bangladesh and the region as the election did not credibly express the will of Bangladeshi people.

“I want to state very clearly that our interest in holding new elections is to ensure a free and fair process,” she said in her opening remark at a fresh hearing on the prospects of democratic reconciliation and workers’ rights in Bangladesh at the US Senate Committee on Foreign Relations in Washington in February.

The United States, said Biswal, has not taken sides or played favourites in who should lead the country. Decision should be left to the Bangladesh people, whose voices were not fairly heard on January 5, she added.