BracUniversity (BracU) has undertaken the noble initiative of designing an ‘English Campaign’ for both its Residential campus at Savar and Mohakhali Campus, to improve students’ English skills. 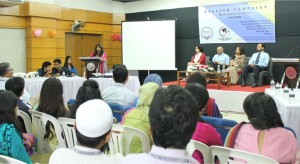 Vice Chancellor Professor Ainun Nishat began by conveying the core communicative skills required to achieve English excellence in the professional sphere, stating: “There is no alternative to polishing and sharpening the tool called English.”

The Joint Registrar Kumar Murshid went on to explain that: “We [the university] need English to compete globally and for that we have to make a conscious effort to use English on BRACU’s premises as much as possible. Our students must achieve a level of linguistic competence that allows them to compete with anyone anywhere”.

After these insightful introductory words, hours of interactive events took place, including a parliamentary debate, poetry recitals and a live music performance, as well as English film screenings and several fun-filled games (Charades, Pictionary, and Hangman).

The diversity of internal and external stakeholders in attendance at the English Campaign launch was a positive sign for the long-term objectives of the Campaign.