Border Security Force (BSF) will deploy women constables next week along the 856 km long border with Bangladesh to stop smuggling by the women from other side of the border, official sources said on Monday.

“A contingent of 27 women constables have already arrived here two weeks back and are undergoing three weeks familiarisation training, and after completion of the training, they would be deployed along the border,” BSF DIG B S Rawat told the media. 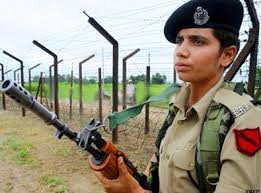 He said they might now be operating from the battalion headquarters as infrastructures, like quarters were not built in the Border Outposts (BOPs). “Earlier it was difficult to frisk women smugglers in the border because the border was manned by men only. Women are the main carrier of smuggling goods and women armed forces were extremely in need to resist them,” he said.

A long patch of land of India was ceded to Bangladesh adhering to the Indira-Mujib Pact signed in 1974 and this lies on the other side of the fencing. There are gates which are opened in the morning and closed at the dusk of the day, reports PTI.

“When the women smugglers move across the fencing on the plea of going to their lands on other side of the fencing, it becomes extremely difficult to check them,” he added.