Leaders of Bangladesh Garment Manufacturer and Exporters Association (BGMEA) said, if the deadlock political is not resolved immediately, they would bring out white flag procession across the country on December 15.

Sounding a note of caution, they said, they  would  take to   the streets together with their workers  if the country’ s prevailing political crisis is not resolved within next five days.

The warning  came on Saturday from a ‘ human-chain’ protesting for a political consensus to end the current crisis. 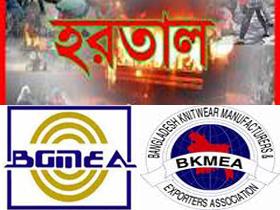 Leaders of several business bodies took part in the human chain in front of the BGMEA office in city’s Karawan Bazaar.

Atiqul Islam, president of BGMEA said  if  violence continues, people would go against both the major political parties. He said, “ If our business cannot function, it will be difficult for us to  pay salary to our employees and  bank loan.”

He also urged both the two top leaders to sit for dialogue to find out a solution to the prevailing impasse. He also sought security of all modes of transport for smooth functioning of the country’s  export-import business. He  made an appeal to keep  transportation of cargo goods and  port outside  any political program.

Abdus Salam Murshedy  speaking on the occasion said there should be an end to violence finding out a solution to the present crisis. “There should be end to killing of people. We do not want to see loss of any life  of any worker or student in acts of  violence.”

Jahangir Al Amin, president of BTMEA said the business community wants  peace and stability in interest of the country’s  business and economy. The political leaders, must sit together to find out a solution to the prevailing  political problems, he said.

Business bodies including the apex FBCCI  tried  in the past to help  find a negotiated   solution to end the deadlock but failed.

In a similar effort, leaders of the BGMEA also met prime minister Sheikh Hasina and also handed over   a  memorandum to  the Gulhan office of the leader of the opposition Begum Khaleda Zia, where one  BNP leader received  it on her behalf as  she was unwell.

The businessmen leaders’  latest move to take the streets is apparently an outcome of the previous failures to mediate a solution to the crisis, which is adversely affecting trade and commerce.