A workshop titled ‘Challenges of women entrepreneurs and ways to overcome’ was organized on Saturday by Bangladesh Women Chamber of Commerce and Industry (BWCCI) in cooperation with USAID and PRODIP of The Asia Foundation at Purbanchal Dialogue Center, Khulna. 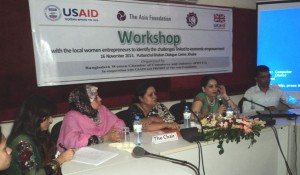 Speaking as chief guest Selima Ahmad said, as women constitute half of the population of the country therefore, the significance of women’s participation in economic activities towards the development of sustainable economy is undeniable. Keeping this huge population out of the mainstream economy, the dream of national development is a far cry, she said.

Ms. Ahmad emphasized on the importance of women’s economic empowerment and pointed out that to materialize this; cooperation from both public and private sectors is needed. She added that women entrepreneurs also need to develop themselves more as business women and run their businesses confidently thus contributing more to the economy of the country.

Apart from this, she told women entrepreneurs to communicate effectively to the local government institutes especially to City Corporation for women entrepreneurs’ access in to market place. Then, she hoped that Bangladesh will truly emerge as a prosperous and self-reliable country.

BWCCI’s Project Manager Sultan Chand presented the findings about the constraints and opportunities of women entrepreneurs in relation to access to finance and in access to market which were identified during the implementation of various activities of the project.

In her closing speech, BWCCI’s divisional Secretary Lutfun Haq Pia thanked Selima Ahmad for continuing her work to achieve women’s economic empowerment. She hoped that all relevant parties would come forward to play more proactive roles in women entrepreneurship development and wrapped up the day’s workshop.