The winners of this year’s Nobel Peace Prize are Malala Yousafzai, the admirable young (17) Pakistani Muslim girl who has most courageously defended the right of girls to education, and Kailash Satyarthi, the Indian Hindu who has led a movement for some 35 years campaigning against child slavery in India. 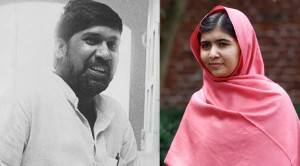 Leaving aside the debate about whether the Nobel Peace Foundation makes judicious choices, one critical question could be whether the Peace Prizes can have any positive impact on what is one of the world’s most turbulent regions with lots of sectarian hate, violence and historical grievances?

Indeed as the awards were announced, the Indo-Pakistani conflict continues unabatedly in Kashmir. As pointed out by ISA (International Strategic Alliance) in Kashmir Flashpoint:

“As the world focuses on conflicts elsewhere in places such as Syria, Iraq and Ukraine, it is easy to forget that the disputed region of Kashmir is the only place in the world where two nuclear-armed countries are engaged in periodic clashes along a much-disputed border. However, the fighting that has broken out between Indian and Pakistani soldiers along the dispute Line of Control in Kashmir this week is a reminder of just how tense the situation there is. Furthermore, domestic factors inside India and Pakistan could lead to a serious escalation in tensions between the two long-time rivals that could spiral out of control and implicate a number of other world powers.”

The conflict in the region is not just between two nuclear-armed states, India and Pakistan, but also between two religions, Hinduism and Islam. The 2002 massacres in Gujarat, under then Chief Minister (now Prime Minister) Narendra Modi’s watch, in which over one thousand people were killed, are a painful illustrative reminder. Will the Nobel Peace Prize Laureates Kailash and Malala succeed in bringing peace between Pakistani and Indian and Muslims and Hindus? Although there are hardly any Hindus left in Pakistan’s population of some 200 million (97% of whom are Muslims), Muslims represent 13.5% of India’s population of 1.2 billion.

Recently in Burma there has been the persecution by Buddhists against the Muslim Rohingyas minority. Major violence broke out in 2012, leading to a high proportion of displaced Rohingyas having to live in refugee camps. Rohingyas are an ethnic/linguistic group, originating from what is today Bangladesh, estimated to number some 1.8 million worldwide, roughly half of whom live in Burma and have done so for several generations. I go to Bangladesh quite often; when I was there in 2013, at a time when the anti-Rohingyas purges were especially violent, a Bangladeshi friend pointed out that while both Burma (in the person of Aung San Suu Kyi) and Bangladesh (in the person of Muhammad Yunus) have Nobel Peace Prize laureates, they were not even talking to each other, let alone trying to build peace.

[This raises the ancillary question: might it not be better if the Nobel Peace Prize were lent rather than given? In other words, you are awarded the Peace Prize so long as you continue to militate for peace; otherwise you should be asked to give it back!]

Though it is East Asia that is generally presented as the world’s most dangerous geopolitical region, especially with the prospect of a Sino-Japanese war perilously looming, but also in light of acute territorial disputes, in fact since the end of the Vietnam war and the Pol Pot Khmer Rouge regime in Cambodia, there has been relatively little actual fighting. In the course of recent decades Southeast Asia has been transformed from a battlefield to a marketplace.

In South Asia, comprising mainly countries formally part – of the British Empire, the situation is very different. For one important thing there has been a considerable contrast between the two regions’ economic growth and poverty reduction. Among the thirteen economies identified by the 2008 report of the Growth and Development Commission that were successful in generating an average annual growth rate of 7% over a 25 year period between 1950 and 2005, nine are from East Asia [China, Hong Kong, Indonesia, Japan, Korea, Malaysia, Singapore, Taiwan and Thailand], in contrast to not a single one from South Asia. Whereas trade and other forms of exchange (investment, transport, tourism, etc) in East Asia have been booming, South Asia has the world’s lowest rate of intra-regional trade. Crossing borders is difficult.

I do not recommend, as I had to on one occasion, trying to fly between Dhaka and Lahore! Though I do strongly recommend crossing the Wagah border, the only road border crossing between Pakistan and India, as it is quite a memorable experience.

South Asia remains a poverty-stricken, conflict-ridden region that harbours, among other things, great violence against women and children. There are more illiterate females in India than in the rest of the planet put together.

Of course the British deserve much of the blame for this state of affairs. The 1947 partition – against which Gandhi and other thought leaders pleaded – was an unmitigated disaster, arguably one of history’s most brutal acts, even if that was not intended. (Salman Rushdie’s novel 1981 novel Midnight’s Children forcefully conveys the bitter flavour of the traumas that ensued. In a very different was the Google advertisement “Reunion” is very moving.) Not only was there and continues to be enmity and violence between Pakistan and India, but also the splitting of Pakistan into two – West and East Pakistan – was a phenomenal blunder that resulted in an atrocious war in 1971, including genocide and mass rape (very movingly evoked in the magnificent novel by Tahmima Anam A Golden Age).

It is impossible to undo what the British did. New foundations are needed to create not only a new regional edifice of peace but also the right spirit. The quatuor of South Asian Nobel Peace Laureates should be encouraged (instructed?) to provide guidance and inspiration.

(On a technical geographic note, it is the case that Burma straddles the two sub-Asian regions, East and South, as it is, for example, a member of ASEAN, but historically it has strong connections to the South and was attached by Britain to its empire in India.)