China is expecting a positive outcome on its discussions with Bangladesh during Prime Minister Sheikh Hasina’s China visit over a deep seaport at Sonadia in Cox’s Bazar, said its Ambassador Li Jun here on Thursday.

“We’re expecting a positive outcome,” he told a select group of reporters at his office prior to his departure for Beijing mentioning that negotiation is still going on the matter. 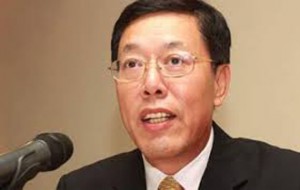 Responding to a question, Li Jun said China is open for consortium to build the deep seaport and open to countries and companies, including India for partnering, reports UNB.

He said Bangladesh, China, Myanmar and the region as a whole will be benefited if the deep seaport is built.

Responding to another question, the diplomat said they have no intention to compete with any other countries.

On April 24, the Chinese diplomat said China has been waiting to know the government decision about two vital projects — building a deep seaport and launching Bangladesh’s first satellite ‘Bangabandhu Satellite’ in the space –as his country already expressed its interest for the projects.

Pakistan and Sri Lanka had built deep seaports in their countries with the help of China.

Meanwhile, Foreign Minister AH Mahmood Ali on Wednesday said there could be discussions during the visit between the two countries on building Sonadia deep seaport with Chinese support.

The Chinese diplomat, however, responded to a volley of questions in written on Bangladesh China relations and the PM’s China visit.

Li Jun said Bangladesh is turning into an attractive destination as its demographic dividend is unveiled gradually, becoming an emerging economy of full vitality.

He said the upcoming visit of Prime Minister Sheikh Hasina will promote the existing bonds, help tap the huge potentials of the two counties, and strengthen cooperation in the fields of infrastructure, power generation, telecommunication and disaster relief to instill fresh vitality to this time-tested tie.

The diplomat said the two negotiation teams from both countries are now working hard on the outcomes of the visit. “Some good progress has been made on a variety of issues and I’m optimistic that they’ll do a good job and strike more agreements in the coming days.”

The Chinese diplomat mentioned that these agreements may include electricity generation, disaster relief, and flood management planning.

“I’m glad to learn that both sides have reached a preliminary consensus in this regard. The two sides will work hand in hand to turn this plan into reality. I hope, the CEPZ will be established in the near future,” he said.

The diplomat said road connectivity between China and Bangladesh would be one of the priority projects under the framework of Bangladesh-China-India-Myanmar Economic Corridor (BCIM-EC).

“And the Chinese side is willing to work with Bangladesh side to put it into fast-track implementation,” he added.