The country’s economy has suffered a loss Tk 11,000 crore in the current fiscal year due to political vandalism, which is around one percent of the gross domestic product (GDP).

“Political vandalism caused a loss of Tk 11,000 crore in the national economy which is around 1 percent of GDP,” Finance Minister AMA Muhith said in his budget speech quoting the World Bank. 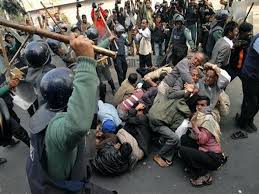 In the run-up to the 10th national election, the Finance Minister said, there had been a serious political unrest in the first six months of the current financial year, reports UNB.

He mentioned that various political parties and alliances observed a total of 45 days of hartal and blockade during July 2013 to January 2014. “These hartals and blockades were not limited to 12 or 24 hours, rather at times even continued for a week.”

Muhith said road communication was disrupted, port activities came to a halt, retail and wholesale buying-selling came down to almost zero level which had a debilitating effect on government revenue collection.

Frenzied destruction of government properties was another salient feature of these hartals and blockades, he observed.

Muhith said the main targets of attack were Bangladesh Railway and government and non-government transports. Government offices and educational institutions were not spared either.

“Alongside the mass destruction of property, there had been a number of death incidents as well,” he added.

On the other hand, he added, the target of tax revenue had to be revised downward at Tk 1 lakh 30 thousand and 178 crore in FY 2013-14 by reducing Tk 11 thousand crore due to political unrest.