The two stations were among five to receive the Girl Power Award for 2014, presented in Dhaka in late November by the Bangladesh NGOs Network for Radio and Communication (BNNRC) in collaboration with Plan International Bangladesh. 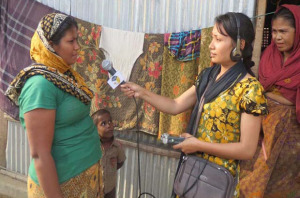 The two projects supported by WACC under its community radio initiative are:

Community Radio Nalta 99.2, run by the Nalta Community Health Foundation, was a winner in category two, feature/report writing on any success story of a girl or young woman, under 1,500 words. Produced by Sabiha Islam, the story focused on a woman named Jamirun who was a victim of a child marriage, then a widow, who lost all her possessions in a disaster. However, she succeeded in her battle against poverty.

Other winners in category one were Community Radio Lokobetar 99.2, for its magazine program that sensitized the community about the needs and benefits of taking proper care of women during their pregnancy, and Community Radio Chilmari 99.2, for a magazine program on a girl with disabilities who achieved high academic achievement despite paralysis.

Other winners in category two were Mahfuj Faruque, Head of News, Community Radio Borendra 99.8, for a feature on a woman who struggled to achieve success and also rehabilitated at least 500 destitute women under an income generating initiative.

Radio Lokobetar also won a prize in category two for a feature on a girl who survived disasters because of her strong spirit. “From this story, we can be inspired to see the ways she had achieved her success in life and took care of her family members as well,” wrote BNNRC Chief Executive Officer Bazlur Rahman in a news release.

Fourteen community radio stations participated in the contest in category one and 15 reporters from 11 stations entered category two.