Bangladesh Film Institute (BFI) held a condolence meeting to pay tribute to young film maker late Shahrain Islam Dipon on Saturday (17th May 2014) in the auditorium of the Institute at Kalabagan.

Mr Tanvir Mokammel, Director of the Bangladesh Film Institute was the Chief Guest. Late Shahrain Islam Dipon was associated with BFI. He worked on different areas of photography in the recently released film Jibonduli, directed by Tanvir Mokammel. 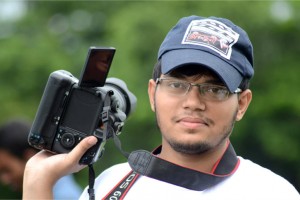 He also produced a documentary on the street children. Besides, he produced a couple of real life documentary. He met a tragic death on 4th may 2014 at the age of 26 years only. Mr. Tanvir Mokammel dwelt upon different qualities of late Dipon, especially his innovative and creative power and highly eulogized his rare talents.

The other speakers also paid rich tribute to late Dipon. His parents and siblings were present and spoke about him. Dipon was a very meritorious student. He passed SSC from St. Joseph High School, Dhaka and HSC from Notre Dame College, Dhaka obtaining a A+.

He was admitted to BUET in Mechanical Engineering in 2006. He was the General Secretary of Josephite Debating Club and arranged many inter-school debate competitions successfully.