Most commercial products don’t reach rural communities. But now, about 7,000 women in these communities are selling products and a new consumer culture to the world’s poorest people. Special correspondent Fred de Sam Lazaro reports on the controversy surrounding commercial ideas of beauty in the conservative rural areas of Bangladesh.

JUDY WOODRUFF: Next: bringing cosmetics, consumerism, and a little controversy to women in rural Bangladesh. 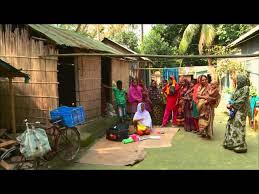 Special correspondent Fred de Sam Lazaro has this report as part of his series Agents for Change.

FRED DE SAM LAZARO: In the conservative rural areas of Bangladesh, Shireen Akhtar is a pioneer. Traditionally, women here don’t stray far from home unless accompanied by their husbands. An actual paying job outside the home was unheard of until recently.

WOMAN (through interpreter): I will take the shampoo and soap.

FRED DE SAM LAZARO: Shireen Akhtar and about 7,000 other women are part of an unusual idea to fight poverty: selling products in a new consumer culture among some of the world’s poorest people.

WOMAN (through interpreter): Our husbands are not always around, so it is difficult to go to the market.

WOMAN (through interpreter): It’s much easier to way. We can get our daily necessities, like soap and shampoo here.

FRED DE SAM LAZARO: It’s a partnership between JITA, a social business set up by the charity CARE, and some large multinational and national companies.

Most commercial products don’t reach rural communities. They’re too isolated or poor to be part of the normal distribution and sales network. Unilever, the Anglo-Dutch multinational that sells everything from Dove soap to Lipton tea, claims two billion people use its products every day, but the company struggles to reach people in these remote parts of South Asia, says spokesman Sheikh Mainul Islam

SHEIKH MAINUL ISLAM, Unilever: There is a metric, exclusivity and profitably. So, there are a number areas, geographies (INAUDIBLE) It’s very difficult to access. Through this, partnering with this particular organization, we can reach to our rural houses directly.

JITA’s CEO, Saif Rashid, admits it was a major shift in mind-set for the development agency.

SAIF RASHID: Evil to the society.

FRED DE SAM LAZARO: But he says the thinking has shifted to promoting entrepreneurship. What if they could create an Avon Lady-type force targeting other consumers in their homes, women often prevented from going to market themselves because of cultural prohibitions?

The saleswomen would earn money and the buyers would have access to soap and other hygienic products. But just what products should be sold alongside necessities like soap has been controversial.

WOMAN (through interpreter): Thank you all for coming to this training today. I know you have all traveled a long way to get here.

FRED DE SAM LAZARO: The saleswomen here are being briefed and trained in on a new product they will soon be able to add to their basket, a prepaid cell phone card. In that basket, one of the hottest sellers so far has been Fair & Lovely. That’s a skin whitening cream. It’s widely advertised across this region and very profitable for the Unilever corporation.

FIRDOUS AZIM, BRAC University: Beauty is created with fair skin, and this has had a terrible impact on young girls.

FRED DE SAM LAZARO: Professor Firdous Azim writes about women’s issues. She and others have protested the sale of skin lighteners, saying it reinforces age-old biases.

FIRDOUS AZIM: I am a teacher and so I that know girls really suffer if they are dark. Traditionally, they suffered because they weren’t considered very eligible in the marriage market. Today, they’re not considered beautiful. And people do all kinds of things to their skin to become fairer. To push this and for a development organization to endorse this is something that I would be very critical of.

FRED DE SAM LAZARO: There’s also the concern about the spread of consumerism.

SAIF ISLAM, CARE International: The profit motive and the social motive need to walk hand in hand together.

FRED DE SAM LAZARO: Saif Islam is with CARE and help set up the JITA program. In all cases, he says JITA must walk a fine line between protecting the interests of the women they women they want to help and paternalism.

SAIF ISLAM: Who are we to judge? It is up to the discretion of the girl who thinks that using Fair & Lovely is giving her this aspiration, the self-confidence. Then it — I don’t see as to why we should throw it away immediately.

How many of this group use Fair & Lovely?

WOMAN (through interpreter): All of us.

WOMAN (through interpreter): I use it to make my skin fairer and for pimples.

WOMAN (through interpreter): I have used it for years to treat pimples and also to remove dark spots.

FRED DE SAM LAZARO: For their part, cosmetic companies say they’re only meeting consumer demand. When I asked Unilever’s Islam if his company creates that demand with its ads, he said the question was above his pay grade. He said only that Fair & Lovely works.

FRED DE SAM LAZARO: So, it does what it promises to do?

FRED DE SAM LAZARO: The JITA program has three categories of product, undesirable. The women don’t carry cigarettes, for example. There are the desirable, seeds for planting, solar lamps, or health and hygiene items, which they’re now promoting among adolescent girls in school.

In the middle are items called acceptable. That’s where Fair & Lovely fits.

FRED DE SAM LAZARO: Fast-moving consumer goods, and especially the skin cream, have the highest profit margins, though JITA’s Rashid says there are plans to make a change by next year.

SAIF RASHID: We’re looking to develop alternatives, which can be really — which will not promote fairness, but which will promote the need of the customer in terms of her skin care.

FRED DE SAM LAZARO: So, by 2015, you will have replaced Fair & Lovely with an alternative product…

FRED DE SAM LAZARO: … that will hopefully not diminish the women’s income?

FRED DE SAM LAZARO: But retaining women has been a challenge: About one in five drops out; they don’t feel cut out for sales or migrate to urban areas in search of more income.

The sales jobs pay anywhere from $12.50 for those starting out to $46 a month for experienced sellers, not much even by Bangladesh’s low wage standards.

But JITA says these sales jobs are part time aimed at married women they and provide critical supplemental income. They say it can mean a better diet or children’s education, for example.

SHIREEN AKHTAR, Saleswoman (through interpreter): I’m poor. I have not been able to dream a lot.

FRED DE SAM LAZARO: For her part, Shireen Akhtar, whose husband works in Bangladesh’s capital as a laborer, says her job has brought improvements, a larger home, a tube well that has brings safe water into it, and a chance to dream for her 11-year-old son.

SHIREEN AKHTAR (through interpreter): I want him to grow from a boy into an important man. After seventh grade, I want him to go to cadet school. After that, he will be able to do anything he wants.

FRED DE SAM LAZARO: JITA officials say the program is expected to grow to 12,000 women by 2015. It’s one of several attempts to attack poverty entrenched in some of the most difficult-to-reach and remote areas, and a trial run they hope for more alliances that link aid charities with consumer-oriented businesses.

JUDY WOODRUFF: Fred’s reporting is a partnership with the Under-Told Stories Project at Saint Mary’s University of Minnesota.