Civil society organisations on Saturday observed that the recent Conference of Parties, COP-19, in Warsaw undermined the interests of least developed countries (LDCs) in climate concerns.

Speaking at a press conference at Jatiya Press Club, they urged the government to work out the future plan on climate challenges relying on the country’s own resources and capacity, reports UNB. 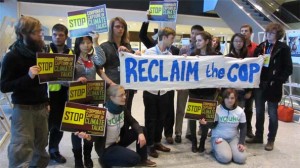 Syed Aminul Hoque of EquityBD, in his keynote speech, said climate vulnerable countries have gained nothing significant or satisfactory in the climate talks in Warsaw because of noncooperation of the developed countries.

Ahsan Uddin of CGC said, “Bangladesh and the other LDCs are now facing a strong opposition in the global forum coming from the Annex 1 countries along with the recently developed LMDC (Like Minded Developing Countries) like India, China and Australia etc.”

“They’re just obstructing the climate talks in every step. They’ve pushed down the Loss & Damage mechanism, the long expected issue of LDCs and CVCs (climate vulnerable countries, towards an uncertainty,” he said, adding that the developed countries are offering just a US$100 million over the promised US$100 billion.