Dr. Mullick also the Chairman, Department of Psychiatry of Bangabandhu SheikhMujibMedicalUniversity said, “Children who experienced corporal punishment have symptoms of abnormally high stress hormones, which can kill neurons in brain areas crucial for thinking and memory, and high levels of an antibody that weakens the immune system”. 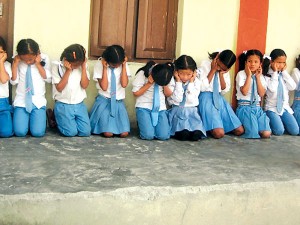 The most common forms of punishment are scolding, hitting on palm with ruler or stick, standing in classroom, hitting on other body parts, slapping, ear, hair or skin twisting and kneeling, reports BSS.

But the UNICEF study (2009) said nine out of 10 children in the country were physically beaten in schools. A 10 year old school student in July 2010 committed suicide after being exposed to such heavy punishment at a Dhaka school. A teacher’s cruelty sent eight children, aged between 7 and 11 to hospital in southeastern Feni after they were severely beaten by their headmistress for forgetting to bring colour pencils in the class.

In December 2011, a teacher beat a ten-year-old boy in Azad Nagar so badly that upon his arrival at a nearby nursing home for treatment, doctors pronounced him dead.

In Rajshahi a woman tortured her maid Sonia Khatun, 9 with an iron rod and then poured boiled water on her body and kept her locked in a room without adequate food in Feb 17, 2011.

Experts said, children, families, educators and the public need to be made aware of laws and practices concerning children’s rights. Then, society will turn away from corporal punishment and teach them discipline with love and mutual respect.

A little understanding of a child’s psyche, love, support and a lot of patience can change things and unruly child can calm down and become the best one, said the experts adding parents need to try in a positive manner.