Democracywatch on Friday organized a day-long youth festival named Connecting Youth for Nation Building (CYNB) to support the network of youth groups working for a better future at its premises in the capital.

This follow-up event spins off as a se     quell of 2013’s ‘Role of Constitution in NationBuilding’ (RCNB) training program commenced on 1st September, 2011 under the endorsement of Democracywatch and American Centre, Bangladesh. 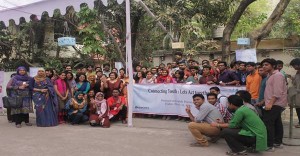 The RCNB program sustained during January – September in 2013.

The event has spawned the buzzards of its reputation and proof-assessment about growing competency and leadership among the youths through inter-generational exchange of views, interpretative workshops and discussion meeting.

In order to rebuild a worthy state, the program aimed at transforming youth into peace-lovers and fueling them enough confidence creating awareness and evolution of the values in this era of globalization.

Most noticeably the event’s measures positively inspired youths and participants from different parts of the country to increase mutual collaboration for ‘NationBuilding’, a desired term since 1971.

“Thanks a lot to Democracywatch for arranging such a splendid event. We people have different ideas in our mind that could play crucial role in communicating, creating awareness even decision making of our national issues but, we can’t expose it because of a proper platform. Democracywatch arranged such a platform what needed to exchange our views. I enjoyed it a lot. Once again heartfelt thanks to DW and youth activists”, said Abu Saleh, studying “Peace and Conflict Studies at University of Dhaka.

Scores of media journalists and reporters covered the event. The event’s coverage motivates the Bangladeshi prospective youths and encourages them to contribute more in nation building process.