Brendon McCullum said he would remember the spine-tingling standing ovation for the rest of his life after he hit New Zealand’s first triple century to secure the Test series win against India.

The captain, carrying back and shoulder injuries, batted for nearly 13 hours for his 302 which united the country in praise and put him in the company of legends Don Bradman and Wally Hammond. 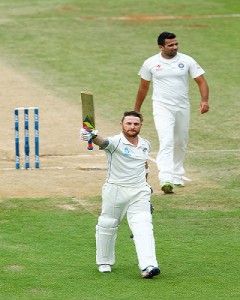 Wellington’s Basin Reserve erupted as McCullum cut Zaheer Khan for four to bring up the triple century, and the applause resumed just two balls later when he was out caught behind.

McCullum admitted to jangling nerves towards the end of his record knock which straddled three days’ play and guaranteed a draw in the second Test, and a 1-0 series win for New Zealand.

“I wasn’t too bad till I saw the size of the crowd then every ball that I defended, left or got a single they would start cheering and it made me a little bit more nervous,” he said.

“That’s probably when I understood the magnitude of the task at hand and the immense joy it gives fans of this cricket team to see guys succeed and see records broken.”

“It was a moment when 300 came up and the applause was ongoing for quite a while. That’s really when it hit home to me that it was quite a significant achievement for a New Zealander and I’ll certainly remember them for the rest of my life.”

After his 224 in the first-Test win, it made him just the third man after Australia’s Bradman, and England’s Hammond in the 1930s, to score double and triple tons in consecutive Tests.

“I’m very respectful of all the guys I managed to get past today, Martin Crowe in particular who’s held the record for over 20 years,” said McCullum.

“I almost feel a little embarrassed to go past someone of that calibre, and Stephen Fleming and all the other names as well.”

“It’s incredibly humbling to put your name up there and score the first triple century for New Zealand.”

The number five batsman came to the crease before lunch on Sunday, with wickets falling and New Zealand staring at a series-levelling defeat in the second Test.

Seven hundred and fifty-nine minutes later, after facing 559 balls, he departed with the match saved, the series won and the Basin Reserve in raptures.

Along the way, McCullum took part in a world-record, 352 sixth-wicket partnership with BJ Watling, while Jimmy Neesham’s 137 was the highest Test debut by a number eight batsman.

McCullum finally fell about 45 minutes into the last day as fans, many of whom took the day off work, were still arriving at the ground in the New Zealand capital.

After New Zealand declared at 680-8, their highest Test score, India saw out the match on 166-3 — with Virat Kohli hitting an unbeaten 105 — to ensure the draw.

Prime Minister John Key was quick to congratulate McCullum, calling his innings “outstanding”, while Ross Taylor, who ceded the captaincy acrimoniously in 2012, said it was “amazing”.

Only 24 cricketers have broken the 300 barrier, four of them twice — including West Indian Brian Lara, who holds the world record for the highest Test innings of 400.

The innings may also be seen as further vindication for McCullum, who became captain 16 months ago in controversial circumstances when popular skipper Taylor was dumped.

New Zealand then went a year without a Test win. But in recent months, McCullum has led them to a 2-0 series victory over the West Indies and now a 1-0 series triumph over India.

Coupled with the 4-0 one-day series win over India, the Black Caps’ form will give them a huge boost as they prepare to co-host the World Cup with Australia next year.

McCullum, previously regarded as a brutal short-form specialist, said he wasn’t sure how he managed to cope with his long-standing back complaint during his epic innings.

“I don’t know really. The back situation is just going to be there for the rest of my career and there will be times when it flares up and it will be pretty tough to handle,” he said.