“The way projects are prepared now following PEC and Ecnec is much impractical…project proforma are archaic and useless for the present time. We’ll have to change it,” he said.

The minister was talking to reporters after holding a pre-budget meeting with the secretaries of different ministries and divisions at the NEC conference room in the city’s Sher-e-Bangla Nagar area in the afternoon. 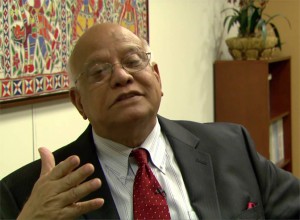 Replying to a question, the Finance Minister said apart from long delay, there is also inefficiency and wastage of time in the planning process for which the time for revision of a project comes at a time when a project is approved. “This is a delayed system and there is a need for a new system,”

About the outcome of the meeting, Muhith said the Secretaries have noted that the Public-Private-Partnership (PPP) initiative is not working and they have made some suggestions to make it more effective. “One secretary has been given the charge on how to make the PPP initiative more effective and then place before the government.”

He also noted that at least 10 percent of the procurement budget of the ministries should be done through e-tendering.

Muhith said the Secretaries have come up with the proposal for excluding the mega projects from the Medium Term Budgetary Framework (MTBF) so that their requirements could be met separately.

Besides, he noted that much greater emphasis should have been given on operations and maintenance activities for ensuring the efficiency of the government while their budget should be expanded.

In the development process, the Finance Minister said there should have to be bottom-up approach alongside the top-down one in a bid to strengthen the local government.

He also indicated that by the end of the tenure of the present government, there would be quite a few districts which would prepare their own budgets.

Terming the MPO system as a failed one, Muhith said the participation of the government in secondary education will continue, but the way facilities under the system were given would be changed.

“It (MPO) should be typed to overall school system not on the teachers and staffs…not only the teachers, but also the school would get the benefits under the system,” he added.

He told a questioner that the existing MPO system will continue in the next budget while changes in the system might take place from the next fiscal after FY 15.

The Finance Minister said the meeting also stressed that there is no such need for constructing new roads as the density of road per square kilometer and per hundred people is one of the highest in the world.

“But, there is a need for maintenance which requires more fund and long-term plan should be undertaken to this end,” he said adding that there is also need for controlling overloading of vehicles on the roads and highways to check their damages.

Muhith also suggested the Secretaries to chalk out their activities for the entire fiscal year once the budget is announced and passed in parliament and thus implement those for better outcomes.