Finance minister AMA Muhith on Sunday said the government turned down a proposal from the International Monetary Fund (IMF) to renew the deal on extended credit facility that will expire early next year.

He said the government would also fix a deadline for the Korean Export Processing Zone for full utilisation of 2,500 acres of land they were allocated in 1996 at Anwara in Chittagong.

Muhith was taking to reporters after a meeting with the visiting Asian Development Bank officials at his secretariat office, reports the New Age. 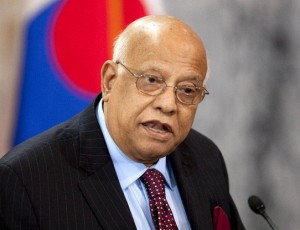 He said the Korean companies were yet to utilise 500 acres of land against the backdrop of severe land crisis and growing demand for land in the country.

Either the Koreans would make full use of the land with a certain deadline or return the unutilised land, he said.

It is reported that the Koreans alleged non-cooperation by the government bodies and politicians for their failure to use the allotted land.

Muhith said negotiation was going on between Dhaka and Delhi after India showed willingness to set up special economic zones in Bangladesh.

Already, Japan and China expressed their keen interest for setting up SEZs and asked the government to remove barriers like energy shortage and bureaucratic hassles.

He said the government would establish coal-fired power plants on the island of Maheshkhali to ensure the electricity supply.

The finance minister said the visiting IMF delegation wanted to extend the ECF deal. But they were already conveyed the government’s decision of not renewing the deal.

He said the government might strike other deals with the IMF if those appeared favourable.

Muhith said there would be no problem in getting the two remaining tranches of the ECF deal.