All the opposition parties, except the allies of the ruling regime, have boycotted this election. The government is accused of extreme politicisation of the country’s civil administration, along with the police, paramilitary agencies, and all key institutions, including the Election Commission, to ensure a favourable election result, said AHRC in a press statement here on Saturday. 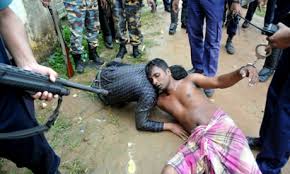 AHRC said, most candidates of the ruling alliance contesting re-election to parliament have become wealthier, two to two thousand times wealthier, during their tenure. The opposition has demanded that incumbent Premier Sheikh Hasina step down prior to the general election for the sake of creating a level playing field for all parties.

The allegations of opposition parties regarding lack of credibility of the election process have proven to be true. Out of 300 parliamentary seats, 153 seats are uncontested, and have thus already been won by ruling alliance candidates. There is a crisis of candidates in the election. At least 52% of the voters have lost their right to vote in the election, which goes against Bangladesh’s Constitution, which holds “direct and participatory voting by the people” as “the source of all power of the republic”.

This has been possible because of an Election Commission (EC), which has, in numerous ways, been a pawn in the hands of the incumbent regime. The EC paved the way for the “withdrawal” of nomination papers of certain candidates, using backdating, so the ruling party’s preferred candidates could win “uncontested”. The EC has done this in violation of the Representation of the Peoples Order (RPO), allegedly following instructions of the ruling party, the Bangladesh Awami League.

A number of candidates of Jatiya Party, led by former military dictator Hussain Muhammad Ershad, had the opposite experience. Their applications seeking withdrawal of nomination papers were rejected by the EC on lame grounds, such as ‘absence of the candidate in person while withdrawing’ although the same candidates’ nominations were accepted without their physical presence when the papers were originally submitted. The Jatiya Party officially and publicly confirmed that they were boycotting the election. The ruling party, which was scared of not having a formal opposition in parliament – as all the contestants and winners would belong to the government – “detained” General Ershad in the CombinedMilitaryHospital in Dhaka Cantonment and created a faction out of Ershad’s party to contest the election. The ruling party used the intelligence agencies, law-enforcement agencies, and armed forces to keep Ershad “hospitalized” although he has claimed that he was not sick at all.

Officers of the civil administration, and members of the police and paramilitary forces are reportedly conducting election campaigns on behalf of the ruling party in the 147 constituencies where “voting” is scheduled to be held tomorrow. The EC, which should have complete control over specific aspects of governance during the election period, has been shamelessly executing the ruling party’s plan without regard for the laws of the land.

The ruling party has planned to rig votes as there is little possibility of voter turnout due to high security threat. The opposition parties has called for stopping the elections and deadly political clashes are taking place across the country.

An Awami League lawmaker, Sheikh Afil Uddin, already an unofficial victor in the January 5 election as his candidacy is uncontested from Jessore-1 constituency, has instructed the party faithful on how to vote again and again, as published by the Daily Star on January 3, 2013. While instructing polling agents of Jessore-2 constituency, Afil stated:

And, while giving directives to Awami League polling agents at ParbazarHigh School on Monday evening in Jessore, the ruling party MP reportedly said:

“Talk of police? No problem. Come to me and I will help you. If you face any problem, any administrative problem, I will face it… But you have to do what you must. Bring voters to the centres and make sure that the votes are cast for boat.”

The opposition political parties have been denied their right to hold peaceful protests including public meetings and rallies in the country in the lead up to this election. The government, for months now, has sealed the offices of the main opposition parties. The opposition parties have been constantly calling for country-wide general strikes and blockades ever since the schedule of election was announced on November 25, 2013. They have been trying to prevent the election through strikes and blockades, violence ridden.

Most Bangladesh opposition leaders are either detained in jail or hiding in secret places to save their lives or avoid detention. On December 24, 2013, opposition leaders called for a “March for Democracy” on December 29, urging people of all walks to express their dissent against the partisan “election”. Since then the “Leader of the Opposition” in the about-to-be-dissolved Parliament, Mrs. Khaleda Zia, a former Premier and chairperson of Bangladesh Nationalist Party (BNP), has remained confined in her rented private residence at Gulshan in Dhaka. The authorities have blocked the streets across Khaleda’s residence, placing five sand-laden trucks and water cannons, and deploying 8 platoons of police and paramilitary forces for the purpose.

The government has deployed an heightened number of police and paramilitary forces in the streets of the country, along with the Bangladesh Army which has also been deployed. There are checkpoints established at virtually every intersection in the country to search bodies and baggage of the travelers, regardless of the age or gender of the passengers. The constant checks by the state agents are a reminder of times of war in Bangladesh. The joint forces comprising the Police, the Rapid Action Battalion (RAB), and the Border Guards, Bangladesh (BGB), are being used to silence the opposition. Prime Minister Sheikh Hasina, who is heading both the Ministry of Home Affairs and the Ministry of Defence, has asked her party activists to “assist” the law-enforcement agencies.

Bangladesh is paying an extremely high price for this election. The Joint Forces, accompanied by ruling party thugs, are conducting massive crackdowns on pro-opposition supporters. They are bulldozing and setting fire to households and business establishments of opposition leaders and activists. Mass arrests of citizens are being effected, followed by arbitrary detention in fabricated cases, amidst the heightened trade of extortion by the police. Numerous people, including women with minor children, are being arrested every day. Actual statistics of illegal arrests and arbitrary detention is not available due to denial of access by relevant agencies. Many pro-opposition activists are being abducted by the joint forces and their whereabouts remain unknown. Virtually every day dead bodies of disappeared opposition activists are found floating in one pond or the other. Extrajudicial murder is increasing and law-enforcement agencies are regularly attacking pro-opposition rallies by direct shooting with live ammunition. Detained activists are being shot in the legs while in custody of the state agents, which is ultimately resulting in amputation of their limbs and permanent disability. Since November 25, 2013, the day the EC announced the schedule of election, at least 59 people have been killed extrajudicially, and at least 10 people have been confirmed to have been disappeared. This is in addition to around 149 people who have lost their lives in political violence between ruling party and opposition supporters. Opposition is retaliating to the ongoing state orchestrated terrorism by violent means. The ultimate result is utter victimisation of countless ordinary people.

Ruling party thugs have attacked Bangladesh’s institutions and its professionals, with the assistance of the police. On December 29 and 30, 2013, the Supreme Court of Bangladesh came under attack. The police detained a group of pro-opposition lawyers, who wished to join the “March for Democracy”, confining them to the Court’s campus. They used water cannons against the lawyers when the lawyers chanted slogans against the government. Later, the ruling party cadres entered the campus, by breaking down the main gate of the Supreme Court, and beat the protesting lawyers. Female lawyers were seen brutally beaten by ruling party thugs, resulting in serious injuries. The ruling party’s female parliamentarians were seen supplying and hurling brickbats at where the pro-opposition lawyers were taking shelter in the Supreme Court. Likewise, the National Press Club was also attacked by ruling party cadre. Ruling party thugs also beat pro-opposition teachers of DhakaUniversity during the same course of attacks. These incidents reflect reckless politicisation and no respect for any profession or institution, not even the Supreme Court.

Any government established through a fake election cannot have legitimacy, locally or internationally. Despite this reality, the government of Sheikh Hasina is adamant. It wishes to stay in power by any and all means to escape prosecution for the crimes the regime has committed against the people and to protect the assets acquired through massive corruption and keep up flow of the same in the immediate future. Ruling regime politicians do not wish to find themselves in the same pit in which they have successfully thrown their political counterparts. It is an uncensored and bloody game that is on in Bangladesh.

The Asian Human Rights Commission has received information from various reliable sources that indicate the horrifying picture that will face Bangladesh after the fake election. The government is preparing to initiate a “cleansing mission” against political opposition and those who have raised a voice against the regime. The pro-Islamists parties are going to be the primary target in order to show the western world that the state is taking an “uncompromising role against the aspirants of Islamic militancy”. Such a plan is already endorsed by a segment of the country’s polarised civil society and media, though a few of the same are critical about the ongoing electoral process. This is because a fake election will weaken their arguments to defend the incumbent regime. It is portended that the leaders and activists of the BNP will likely be extrajudicially executed in “crossfire” killings and enforced disappearances. Any form of protest by the opposition and any criticism will be covered up with the excuse of “controlling Islamic militancy” for the sake of peace and stability in the region.

The period promises to be the worst in post-independent Bangladesh. People’s right to life, right to liberty, right to livelihood, and freedom of expression will be in peril. Human rights defenders are not likely to be spared, in the coming circumstances. Massive civil strife is likely unless the gravity of the situation is understood and addressed by the people at home and abroad.

A unified effort from civil society and the people in general, for the sake of basic stability, is in dire need. The people of Bangladesh should not leave any stone unturned to avoid further bloodshed in their beloved motherland. The blood shed in liberating Bangladesh was not so more blood of Bangladeshis could be spilled in civil war.

The international community must support the efforts of civil society in Bangladesh to prevent the coming catastrophe. The United Nations is mandated to intervene. The world cannot turn a blind eye to the overwhelming threat.