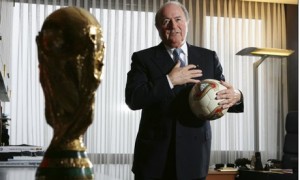 ifa  executive has issued a passionate call for a wide-ranging debate over the future of the game before the governing body’s next presidential election in 2015, warning that a “coronation” for any candidate could be disastrous for football.

Jérôme Champagne, a former French diplomat who spent 11 years at Fifa in a variety of roles including deputy general secretary before being ousted in 2010 in a coup led by the later tarnished Asian Football Confederation president Mohamed Bin Hammam, is also pondering whether to stand himself.

“The 2015 election will be a very, very, very important moment because that election will determine football until 2025 or 2030. I don’t know when I will decide. It’s not the moment, because we need to know what is going to happen. We need a debate,” Champagne told the Guardian. “For the moment I can’t answer the question. I don’t rule out anything, but I have not decided yes or no. 2015 will be a decisive moment, for me it’s clear.”

Blatter had previously said that his fourth term would be his last but the Swiss looks increasingly likely to stand again. Michel Platini, meanwhile, was long considered Blatter’s natural successor but the Uefa president appears beleaguered by a string of problems. Both have said they will make their intentions clear after next year’s World Cup finals in Brazil.

Champagne said it was too early to decide whether to stand himself but, having advised football associations in trouble spots from Palestine to Kosovo to Northern Cyprus in the past two years, was confident he would meet the necessary criteria. They include having held an active role in football for two of the past five years and nominations from at least five of Fifa’s 208 members.

Given the scale of the challenges facing the sport and Fifa, under fire in recent years over long-standing corruption allegations and the chaotic process that culminated in the award of the 2018 and 2022 World Cups to Russia and Qatar, Champagne believes it is vital that there is a proper debate about the game’s future and that of its governing body. He said: “There is a need for new impetus, fresh air, new vision and some momentum. But at the same time keeping what has been done correctly for 40 years – the universalisation of the game, the development programme. We need a stronger Fifa.”

Champagne proposes a rebalancing of the all-powerful executive committee to give the Fifa president a working majority and make it more representative of the game as a whole by including national associations, players’ organisations, clubs and leagues.

“The life and blood of football is when Saturday comes, not when Wednesday night comes. You can’t run football in the 21st century if you don’t have representatives of the leagues on the inside.”

Champagne, who is also an adviser to the French Football Federation, said there were a range of serious issues facing the game that were simply not being debated.

“The second phenomenon is that football is becoming more and more privatised. It is more and more controlled by private individuals and even governments. Third, the football structures and sports structures have lost a lot of credibility.

“Stir all that in the pot and you have to decide if you want football to become like basketball with one or two leagues becoming the NBA and Fifa becoming like Fiba, without any regulating power. Or do we want a globalisation that is successful for everyone? It’s not about putting the toothpaste back in the tube, but about making sure everyone benefits. To do that, we need a world governing body that is more proactive, more respected, more democratic.”