This May, foodpanda Bangladesh, the largest online food ordering and delivery platform of the country, started an online campaign named ‘Save 1 Hour’. The campaign continued for 4 weeks, starting from 25th May 2015, on social media (Facebook).

The campaign, “Save 1 Hour” focused on the 1 hour that one can save while waiting for the food ordered via foodpanda, and most importantly, how that person utilized that 1 hour. Every week participants got opportunities to win prizes like vouchers, hard disks, tablets and many 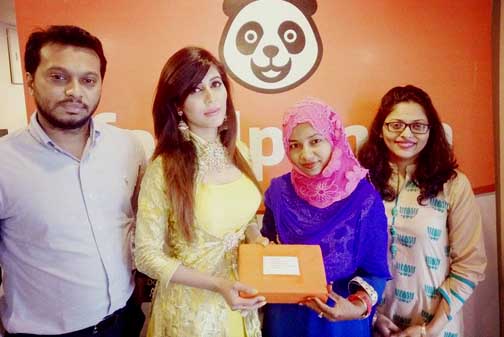 more by taking part in that campaign. Participants were requested to send in creative ideas and plans, in forms of photos, videos etc, on what they could have done in the 1 hour they saved by ordering on foodpanda.

To spice things up, Naila Nayem, a flourishing Bangladeshi model and actress, was signed by foodpanda Bangladesh for the campaign. Every week, Naila Nayem told her fans and followers how she used the time she saved by ordering on foodpanda, by channeling it into other productive and recreational activities.

On the 30th of July, foodpanda Bangladesh hosted the prize-giving ceremony at Rice n Noodles Restaurant in Banani. At this event the grand prize winner Ms. Soma Akhter was handed the grand prize by Naila Nayem. foodpanda Managing Directors, Mr. Zubair Siddiky, Ambareen Reza along with their foodpanda Marketing head, Ms. Sakerina Khaled were there to discuss the success of the campaign.

After the enormous success of the campaign, foodpanda ensures their customers and followers to stay tune for such exciting campaigns in the future.

foodpanda, a venture of Rocket Internet, is an online food ordering portal headquartered in Berlin, which allows people to choose and order from a wide range of restaurants available around their neighborhood. At present, foodpanda is operating in more than 40 countries across five continents, and in 3 cities in Bangladesh (Dhaka, Chittagong and Sylhet). foodpanda started its journey in Bangladesh on December 2013.

foodpanda is a global online food ordering marketplace where people can discover, choose and order from the widest range of food places around their area. foodpanda is a venture of the largest internet incubator, Rocket Internet, and was founded in Bangladesh in the year 2013. foodpanda is now operating in more than 40 countries across five continents, and in 3 cities in Bangladesh; Dhaka, Chittagong and Sylhet. Visit the website, www.foodpanda.com.bd, to know more about foodpanda.