Former cabinet minister engineer LK Siddiqi passed away today in Singapore. LK Siddiqi, also the ex-deputy speaker of Bangladesh parliament, breathed his last around 11:00AM. He was 76. 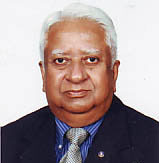 His body will be brought to the country today, Saturday, 2 August.

He left behind his wife, one daughter, three sons and many well wishers.

All the relatives, friends and well wishers of him, have been requested to attend the Janaza and pray for the departed soul.