The country’s gross domestic product (GDP) target may be lowered to 6.2 percent from the existing target of 7.2 percent, as the prevailing unrest is generating many risk factors in the economy, sources in the Finance and the Planning Ministries say.

The policy makers are also thinking of lowering GDP target due to political instability. 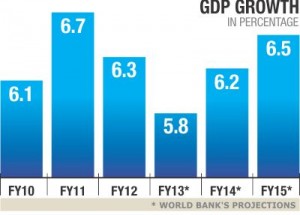 The Finance Ministry placed a report in the meeting on the macro-economic situation in the first quarter (July-September) of the current fiscal year. Bangladesh Bank also presented a separate report on average GDP growth rate of the last five years.

The BB report says that the country would not be able to achieve the targeted GDP target this year due to political turmoil. It suggested the government to slash it to 6.2 percent. Finance Minister AMA Muhith also supported the BB’s view and said that the GDP target might be revised in February, meeting sources said. World Bank (WB) and Asian Development Bank (ADB) earlier said that Bangladesh would not be able to achieve its targeted growth mainly due to political unrest. The GDP growth of Bangladesh would be over 5.8 percent in 2013-14 fiscal year as per the ADB forecast.

According to Bangladesh Bureau of Statistics (BBS), the country achieved 6.18 percent growth in the 2012-13 fiscal.

The NBR has also suggested to slash Revenue Earning Targets, as it finds bleak possibility to earn the target due to political unrest.

Hartal may cast a negative effect on revenue income, especially in VAT collection from import and domestic sources, NBR sources said. The overall revenue collection of the NBR was 18.1 percent in the first quarter of the current fiscal year, against 18.7 percent in the same period last year. The Finance Minister ultimately agreed to downsize the revenue target apprehending fall in target in the coming days. The government has a revenue income target of about Tk 1.37 lakh crore through NBR in this fiscal year.

The government is depending largely on bank borrowing due to increase of its expenditure amidst falling income. The government’s bank borrowing in the current fiscal year stood at Tk 5200 crore up to November. The ERD informed the government that foreign assistance also decreased due to economic recession in Europe and the USA.

The Finance Ministry in its report mentioned that remittance income was 10 percent lower upto October of the current fiscal than that of the previous fiscal.

Many workers in Saudi Arabia had to spend extra amounts to renew work permits, and so they could not remit money to the country during this period.

Export income was satisfactory during the time, the Finance Ministry observed but said that the trend would not continue due to slump in Europe and the USA and labour unrest in the Bangladesh sector in Bangladesh.