German Ambassador in Dhaka Dr Albrecht Conze has expressed concern over the government’s recent decisions to construct a coal-fired power plant not far from the Sundarbarns and a nuclear power plant near Pabna.

Ambassador Conze made this statement while opening the Goalpara Power Substation in Khulna on Sunday, which has recently been upgraded through introduction of energy efficient technology with support from German Development Cooperation (GDC), according to a media release issued by GIZ. 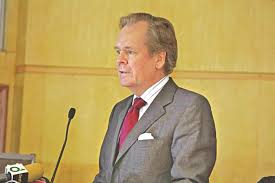 After the opening, the Ambassador briefed local and national journalists at the auditorium of Khulna Power Company Limited (KPCL).

Referring explicitly to the incalculable risks the Rampal power plant could pose on the adjacent sanctuary of the Sundarbans, Conze cautioned, “I’m not convinced that the positive effects of the Rampal Power Plant which is expected to provide 1,320 MW of electricity for the southwest of Bangladesh will outweigh the environmental risks of the project.”

Praising the natural beauty of the Sundarbans, he mentioned their status as a Unesco World Heritage site. “I know from the experience which my own country had to go through that Unesco regularly reviews and, occasionally, revokes this prestigious status in cases of serious manmade alterations to the environment of such sites.

The German envoy said Bangladesh’s greatest natural treasure ought to be protected at all cost, and should remain the pride of this country. It is not too late to look for other sites.”

“Although Germany has opted out of nuclear power generation after the Fukushima accident, we respect that other countries may make different choices,” he said.

However, the envoy pointed out two serious risks. “First, you’ll see water temperature rise around the power plant, due to the need for constantly cooling the reactor. That will change the ecosystem.

And second, you can never rule out earthquakes in Bangladesh. In general, nuclear power plants always pose risks which are hard to calculate when they are being built in seismically unsafe areas.”

Conze mentioned that Bangladesh has made remarkable progress in generating the electric power the country needs to achieve a middle-income status. In this period of rapid growth of demand and supply for electricity, it’s of great importance that the right choices are being made.

He, however, welcomed recent reports indicating Bangladesh’s interest in working together with Nepal and Bhutan to use the potential of water energy.

“With hydropower from the Himalayas and offshore natural gas from the Bay of Bengal, Bangladesh should, in a not-so-distant future, be able to generate most of the power it will need, while minimising the negative impact of energy generation on the country’s environment,” said the diplomat.