Christopher Sweeney, a Glasgow nurse has given away cash he’d been awarded for his top grades at Glasgow Caledonian University to help poor people in the Asian nation.

The nurse has shown his caring credentials by treating the sick in Bangladesh and donating cash to fund medical staff there.

Christopher Sweeney visited the country with a delegation of students from GlasgowCaledonianUniversity last year. 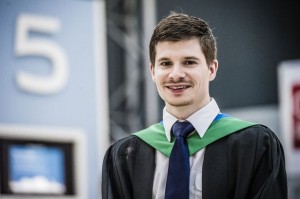 And he was touched by the humility of people needing health care that many Glaswegians take for granted.

So when the 27-year-old was given a prize for his top grades when he graduated with a BSc (Hons) in Specialist Community Public Health Nursing, he donated the prize money to a nursing college in Bangladesh.

Christopher, of Shawlands, said: “You have a lot of common ground with people and it takes so little to make a positive change.

“I have worked in Ghana ?and Nepal before but people  just want the same things, no matter where they are or ?what circumstances they are in.”

While in Bangladesh, Christopher and students from GCU’s School of Health and Life Sciences worked with the GrameenCaledonianCollege of Nursing, set up in 2010 through a partnership between the university and the Grameen Trust.

Respiratory diseases and diarrhoea are the biggest killers of children under five in the country.

During his time in a small rural village, people brought presents including pencils and even a banana to thank him and others for the care they provided.

Christopher said: “The poverty didn’t stop everyone there and from surrounding villages bringing me gifts and tea. It was a big occasion for them to have a visitor.”

His prize money will go to GCCN’s Students Association and the Alumni Association to help their work with those in need.

Christopher, who is now qualified to work as a health visitor but may continue his studies, added: “The college in Bangladesh can do a lot more with the money than I could.”