If the Indian media has devoted wall-to-wall coverage of the Nepal earthquake, they were shown their place on social media on Sunday, the top trending hashtag being #GoHomeIndianMedia, which until evening had collected about 144,000 tweets. 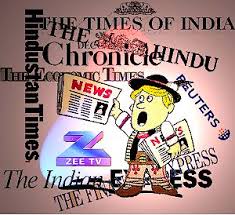 The online outrage is connected to the accusation that Indian TV channels have engaged in “insensitive” reporting of the aftermath of the earthquake. The TV channels, with their penchant for shoving microphones at suffering victims, have been accused of gross misconduct, in some situations even confronting security forces at the site of the devastation. They have intruded into family cremations, questioned grieving relatives, and generally shown a picture that many have found to be cringe-worthy.

The Indian media, and here a distinction would have to be made between the TV channels and the print media, have also been accused of showing the efforts of the Indian Army, and Indian disaster-relief personnel at work in Nepal, in a glowing light.

Some of the tweets were scathing — “dangerous insensitive journalism without any humane elements, such a tragedy in the aftermath of one”; “Indian media ruining harmony, neighbourhood, respect and affection between Nepal-India by their unethical journalism”; “Dear vultures, you’ve picked the bones of the dead clean. Go home now”.

In the hours after the devastating earthquake, Indian TV channels were the first on the ground. Their stories and their pictures brought the massive destruction to living rooms across the country and the world. It generated a massive response from the Indian public, with schools and Bollywood all pitching in with relief and assistance. In many ways, it has driven the global response to Nepal.

But in the week since the tragedy, the TV channels’ relentless quest to feed the 24/7 news networks have elicited stories that may have been exaggerated, while the pressure of competition may have led them to resort to hyperbole in ways that probably should have been reined in. But the stories have been aired without question by the channels.

“Stop your media-quake!! We are already in pang by devastating earthquake and your news are not helping the victims!!” said an anguished tweet.

Of course, the part of the story that no one talks about is what would have happened if the Indian media was not all out there? The first, and most justified criticism, would have been again about an insensitive media. But on an instant high, Twitter has stood in judgment.